The Toxic gets Sapphire’s customary touch, equipping the card with one of their famous Vapor-X coolers, the cornerstone of which is the use of a vapor chamber in the cooling assembly’s baseplate. The entire assembly is a card-sized aluminum heatsink connected to the baseplate by 3 heatpipes, with a 92mm fan in the center.  Meanwhile the back of the card has a plate on it to serve double-duty as both a decoration and as a heatsink for the 8 128MB GDDR5 RAM modules on the back of the PCB. As with their other Vapor-X cooler products, the Vapor-X cooler on the Toxic is a partially covered design that blows air towards both the front and the rear of the card, so you’ll need a well-ventilated case for this card.

Moving on to the PCB, as with everything else this is a custom Sapphire design, a new design necessary to fit the extra 1GB of RAM. The card is 10.15” in length, making it shorter than the reference 5870. Unfortunately Sapphire also kept up their tradition of putting the PCIe power sockets on the rear of the card instead of the top, so it’s really 10.15” plus whatever room you need to maneuver your power cords. Speaking of which, since this is a 2GB 5870, the 5870 Toxic 2GB requires both 8pin and 6pin PCIe power to operate. 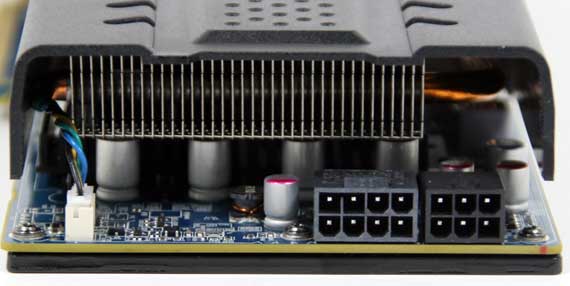 For component selection, Sapphire has decided to focus on their use of chokes and capacitors. Once again we see Sapphire’s grooved “Black Diamond” solid state chokes, and all of their capacitors are solid capacitors. As is the case with the rest of the cards in this roundup, this is as much a technical matter as it is a marketing matter: the reference 5870 design already uses solid state chokes and solid capacitors. So the difference comes down to component selection, with Sapphire using their higher quality chokes.

Sapphire is once again targeting the factory overclock market with the Toxic, shipping the card with a core clock of 925MHz and a memory clock of 1.225GHz (4.9GHz effective) – 75MHz and 100MHz faster than the stock 5870’s core and memory respectively. Since Sapphire isn’t targeting overclockers with this card it should come as no surprise that there’s little in the way of overclocking features for it. There is a generous overdrive limit of 1000/1500 for the card, but as it’s using Sapphire’s unprogrammable VRMs, there’s no way to change the GPU voltage. Making up for that is the card’s slightly higher default core voltage of 1.2v, necessary to drive the card’s higher core clock.

Since this is not an Eyefinity 6 edition card, the port configuration is AMD’s standard Eyefinity configuration: 2xDVI, 1x DP, and 1x HDMI. The 2GB of RAM should also be of some help when it comes to Eyefinity, however as we saw in our 5870E6 review it’s limited at best. 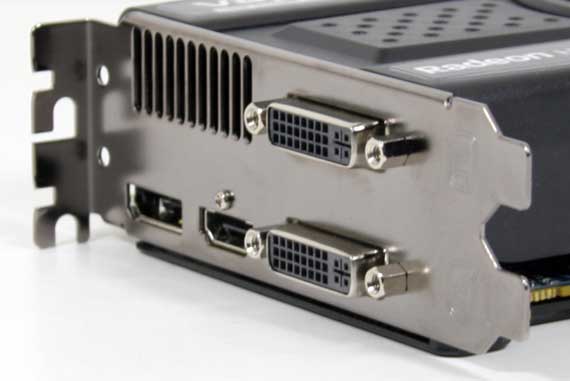 The retail price of the card is around $500 – we briefly saw it at $489 before it went out of stock. Compared to the other cards in this roundup, the Toxic is going to be the hardest to find, as it’s currently out of stock everywhere we’ve checked. When in stock however, it’s priced close enough to the 5870E6 that they’re substitute products, so if you’re willing to give up 3 mini-DisplayPorts, you can get a factory overclocked 5870 instead.