Next up we have MSI’s Radeon HD 5870 Lightning, the latest in their line of overclocker-focused video cards. The 5870 Lightning is perhaps the boldest Lightning yet, deviating quite a bit from the 5870’s reference design. 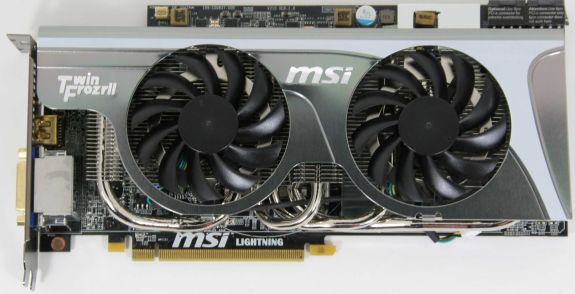 At the heart of the Lightning is MSI’s custom PCB, an unusually sized board with no existing peer. Notably the board is slightly taller than a standard board, giving MSI a bit more room to put components and traces. The extra 2/3rds of an inch in height shouldn’t be a problem in any case that we’ve seen, but it bears mentioning. Meanwhile the card measures a bit over 10.2” in length, shorter than the reference 5870.

MSI went all-out for power delivery on the Lightning, outfitting the card with a total of 15 VRM phases – 12 for the GPU and 3 for the memory & memory controller. Additional phases usually reduce power efficiency some, but it helps to better deliver power under high load. As a way to display these VRMs, there are 12 LED lights on the back of the card representing the 12 phases for the GPU, which light up to indicate how many of the phases are active.

Feeding those VRM phases is a pair of 8pin PCIe power sockets, another unusual quirk for a video card. As we know, 6pin + 8pin is enough to reach the 300W limit of the ATX spec, so a 8pin + 8pin is a pretty loud declaration that MSI intends to push the limit. Even though this is a 1GB 5870 (reference TDP: 188W), the Lightning requires at a minimum 6pin + 8pin power to operate. 8pin power is optional on the second socket, but is highly recommended, especially when overclocking.

Also found on the Lightning’s PCB are 3 sets of voltage check points for use with a multimeter. This is another one of the Lightning series’ trademark features, and while there’s little arguing that it’s overkill when using air cooling, we’re told that they come in handy for the extreme overclockers using liquid nitrogen – it’s that kind of card. 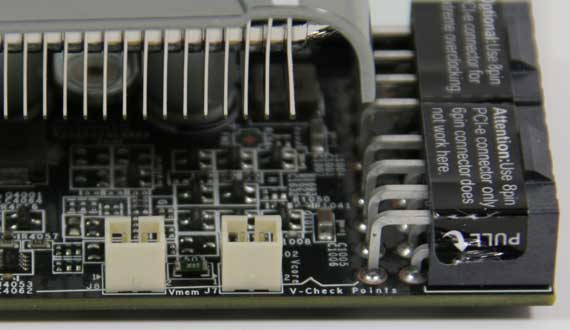 As with the other cards in this roundup, a great deal of the design is focused on component selection. MSI calls their component selection “military class”, calling attention to their otherwise standard use of solid state chokes and solid capacitors. Mixing things up some however is the addition of what MSI are calling Hi-C capacitors, which we believe to be solid tantalum capacitors. Also in use are Proadlizers – a fairly new type of decoupling capacitor from NEC Tokin. Proadilizers in particular are hard to miss due to their size (pictures on the next page) and we aren’t immediately aware of any other cards using them beyond the Lightning and Gigabyte’s Super Overclock.

For cooling purposes MSI has equipped the Lightning with one of their Twin Frozer II heatsinks, composed of a card-sized aluminum heatsink with 4 heatpipes running to the baseplate. Sitting atop the heatsink is a pair of 80mm fans and a small metal cover that does little to direct airflow, resulting in the card directing air out in all directions. As this card is another design that recycles air in the case you’ll want a well-ventilated case to deal with this.

Meanwhile the port configuration is the standard Eyefinity configuration of 2xDVI, 1x DP, and 1x HDMI. This leaves the card with a half-slot vent, reiterating the fact that this card requires a well-ventilated case to get the appropriate airflow.

Finally, as an overclocking card MSI has augmented the hardware with their excellent RivaTuner-based Afterburner software suite, which provides direct control over and monitoring of the card. Through Afterburner MSI allows you to increase the core voltage by up to 15%, topping out at 1.35v. As you’ll see in our overclocking section, this is a pretty hefty range intended for exotic cooling solutions, as the Twin Frozr II cooler can’t keep up with the heat beyond 1.3v or so. 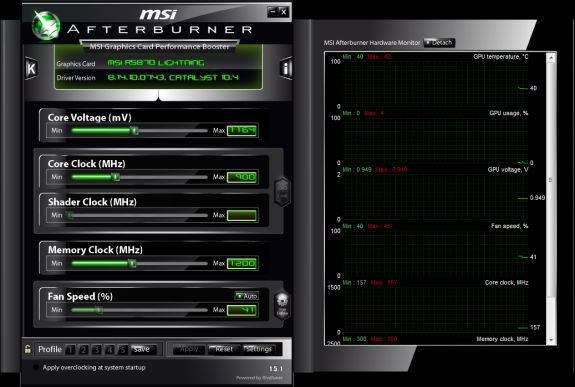 Pack-in items for the card are a mix of the usual and a few items specifically for the Lightning. You get the usual mix of generic manuals, drivers, CF bridges, and a VGA dongle, but along with that packs in 3 very handy cables for accessing the card’s voltage monitoring points with a multimeter, a pair of 6pin-to-8pin PCIe power adaptors, and a 6ft HDMI cable. The PCIe power adaptors negate any issues with the card’s 8pin PCIe power requirement, although with the amount of power this card can pull we’d strongly suggest having at least 1 real 8pin power cable feeding the card.

The retail price of the card is around $480, similar to the other cards in our roundup. As of this moment it looks to be readily available.