The platform is called Brazos. Brazos encompasses two chips: a Zacate or Ontario APU (Accelerated Processing Unit) and the Hudson Fusion Controller Hub (FCH). This is the whole reason AMD bought ATI, Zacate and Ontario are its first CPU-GPU hybrids. 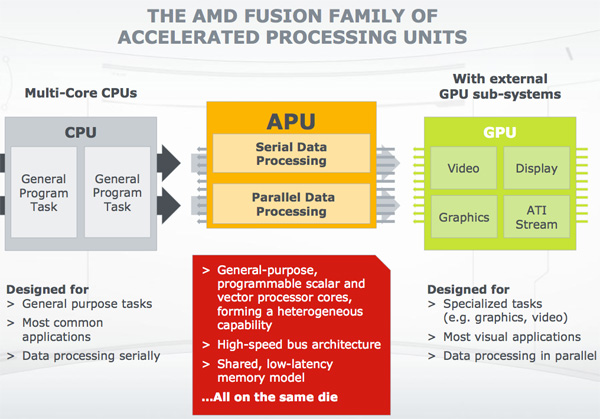 While AMD is primarily targeting the netbook/ultraportable and notebook markets with Ontario and Zacate (respectively), we’ll also see nettops/desktops and mini-ITX motherboards based on Brazos. This may be the first time we see real competition to NVIDIA’s ION platform.

Both APUs are built from the same die. Zacate and Ontario are physically identical, they just run at different clock speeds. The 40nm die is manufactured at TSMC and measures 75mm^2. The chip is very cheap to package as well. The BGA package only has 413 balls. As one AMDer put it, these chips are designed to be stamped out as quickly and as cheaply as possible.

Both are available in single and dual core versions, although the single core variant is just a dual-core chip with one core disabled to hit various market segments. Core unlocking is apparently possible, but unexpected given the target for these platforms and the amount of effort OEMs would have to go to in order to enable it.

The CPU cores are based on AMD’s first truly low power client architecture, codenamed Bobcat. We’ve discussed Bobcat in great length already, but at a high level it looks a lot like an out-of-order Atom processor without Hyper Threading. The fundamental architecture advantage should give Bobcat the performance advantage over Atom, at least at identical clock speeds. 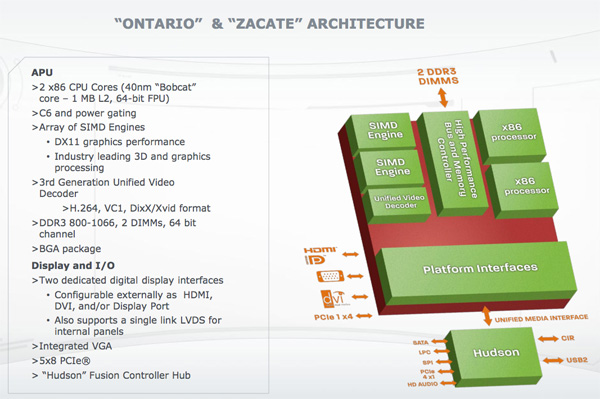 The GPU is based on AMD’s 5000 series architecture (Evergreen) and features 80 shader cores and AMD’s new UVD3 decode engine.

At launch you’ll see four SKUs, the combinations and specs are listed below:

Zacate takes the top two SKUs, while Ontario makes up the bottom two. The difference in TDP is entirely based on the clock speed of the CPU and GPU. And here is my concern. While a pair of Bobcats running at 1.6GHz are just awesome, drop the clock to 1.0GHz and I start getting concerned about performance. AMD didn’t let us test the C-50 but I’m curious to see what the margin of victory will be over Atom at that speed.

The GPU runs at 500MHz at the high end (Radeon HD 6310) and 280MHz at the low end (Radeon HD 6250). This paired with the single channel DDR3-800/1066 memory bus that has to be shared with the Bobcat cores means you should expect sub-5450 levels of performance out of these systems. Given their price point, that’s potentially not too bad. More enticing however is the fact that these APUs gain the benefit of the driver work AMD does on its discrete cards. Finally, game compatibility should be just as good on the low end as it is on the high end - assuming you meet the minimum specs for the title you’re running.

The lack of a brand for the CPU is a bit puzzling, but graphics are where it’s at these days. 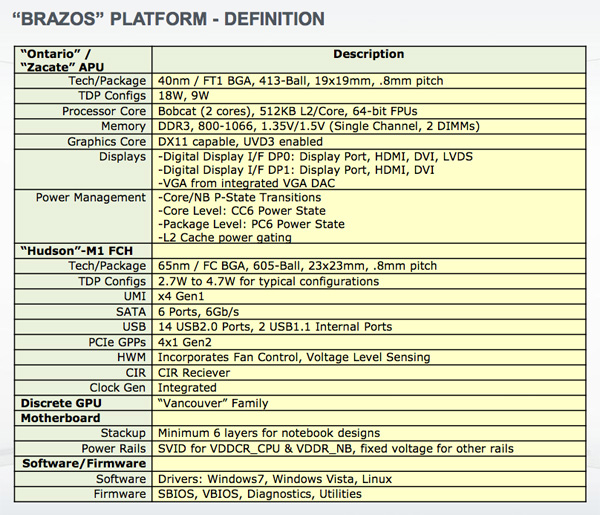