AMD provided this slide of PCMark Vantage and 3DMark Vantage performance of Brazos compared to its existing mobile platforms (Danube and Nile): 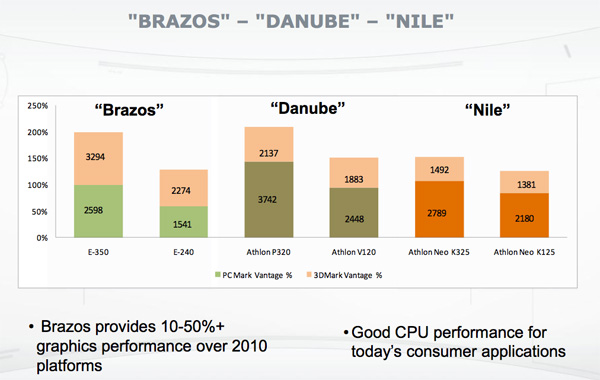 If you look at the PCMark Vantage numbers you'll see that AMD's E-350 provides roughly the same performance as an Athlon V120. That's a single core, 45nm chip running at 2.2GHz with a 512KB L2 cache. Or compared to a dual core processor, it's within striking distance of the Athlon Neo K325 which features two cores running at 1.3GHz and 1MB L2 per core. The GPU performance however tells a very important story. While AMD's previous platforms offered a great deal of CPU performance and an arguably imbalanced amount of GPU performance, Brazos almost does the opposite. You get a slower CPU than most existing mainstream platforms, but a much better GPU. 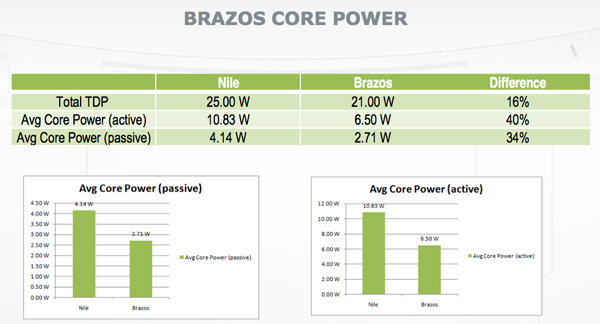 In the sub-$500 market, you're not going to get much in the way of a discrete GPU. What AMD is hoping for is that you'll be happy enough with Brazos' CPU performance and be sold on its GPU performance and total power consumption. From AMD's standpoint, there's not much expense involved in producing a Zacate/Ontario APU, making Brazos a nice way of capitalizing on mainstream platforms. The 75mm2 die itself is smaller than most discrete GPUs as well as anything Intel is selling into these market segments.

Brazos, like Atom, will fight a two front war. On the one hand you have the price comparison. The E-350 will be found in notebooks in the $400 - $500 range according to AMD. That puts it up against mainstream notebooks with 2.2GHz Intel Pentium DC and 2.26GHz Core i3-350M processors. Against these platforms, Brazos won't stand a chance as far as CPU performance goes but it should do very well in GPU bound games. I've included results from a 2.2GHz Pentium dual-core part (1MB L2 cache) as well as a simulated Core i3-350M in the mobile IGP comparison.