Rosewill Thor v2: The God of Cooling and Silence?

Do you remember when I said the Rosewill Thor v2's internals reminded me of the insides of Corsair's cases? That's a good thing and a compliment: Corsair's cases are still the easiest ones to build in I've ever seen, and thankfully the Thor v2 was just as easy to work with.

Installing the motherboard was easy and painless, though Rosewill doesn't include stand-offs built straight into the board, a convenience I do miss. Where Rosewill does run afoul of Corsair is in the rubber grommets used to line the holes in the motherboard tray, which as I said before are held in largely by wishful thinking. Honestly they're just not strong enough to stay in and for most of my cable routing I wound up either accidentally or deliberately popping them out, and this was going on pretty much from the get go.

Unfortunately, while the drive trays are still back-facing and thus awesome, they aren't tool-less. The trays support both 2.5" and 3.5" drives, though only the 3.5" drives use rubber standoffs to dampen vibration (presumably anyone using 2.5" drives would have SSDs), and drives are always mounted from the bottom instead of the sides. Still, the trays work well enough and routing the cables behind them was a breeze. 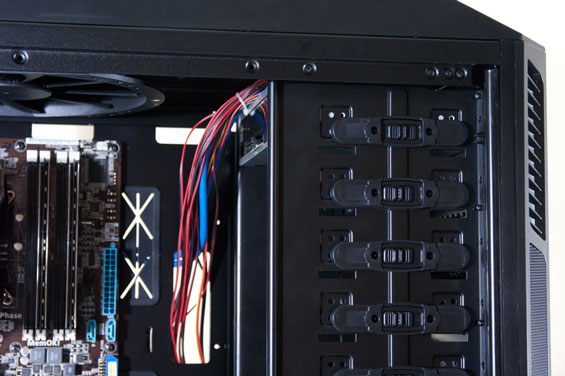 The same can't be said for the tool-less mechanism Rosewill uses for installing 5.25" drives. To remove the bay covers, you actually slide the right part of the case's front bezel off and then lever out the covers. Honestly, the old school "squeeze-and-pop" bay shields would've been perfectly fine here. My main problem is that the tool-less mechanism used to lock the drives into place is flimsy and loose. Optical drives are often among the loudest components in a good build, and with very little really securing them, they're free to vibrate in the bay. I would have been happier with just openings for screwing them in, and thankfully, you can forego using the case's locks and just use screws to mount them. 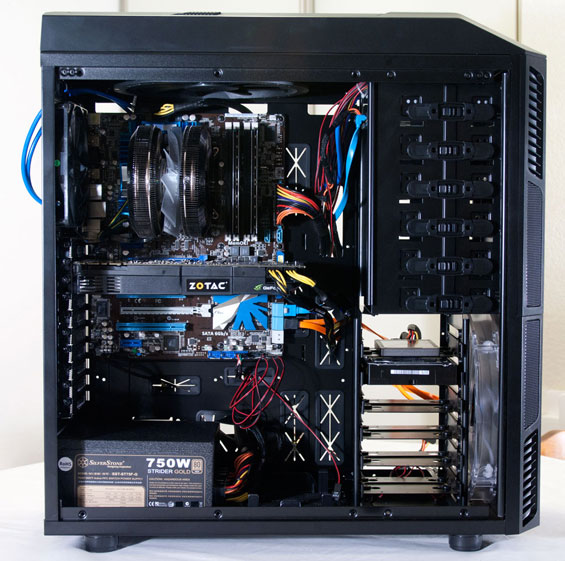 Getting the power supply in and everything else wired up was delightfully painless, as you'd expect from a chassis this size. While the case's cables are a mess of tiny wires, they're ultimately still fairly easy to actually sift through, and there's plenty of space behind the motherboard tray to keep the installation clean. The only issue I really ran into was routing the USB 3.0 cables out the back of the case: the rubber grommets in the back are just as loose as the ones inside, and shoving the cables through them invariably caused them to pop out. You'll also have to route a fan controller cable to the inside so you can connect the side intake fan, something you'll definitely want to do.

All told my chief complaints remain the iffy build quality. The rubber grommets are no big deal (NZXT's H2 had the same problem), but just about everything about the 5.25" drive bays rubbed me the wrong way. They aren't a huge issue and you can work around the problems, but even the material that lines the inside of the bay shields to filter dust is barely held in place. The fan controllers in my first review unit were also problematic: if I didn't tape the knob down, eventually fan speed would just ramp back up to full. I don't want to have to choose between having a tower that runs silent and cool with a piece of shipping tape on the top of it or a tower that runs very cool but with some noise, and I shouldn't have to. Judging from reviews on NewEgg, though, my problem seems to be isolated.