I have decided to tackle the BIOSes of the Extreme4-M and Extreme4 together, as they are much the same with the only major difference being the detection of the various extra ports and connectors the larger Extreme4 has over the mATX Extreme4-M.

For our troubles of moving to X79, ASRock have mildly revamped their BIOS user interface, deciding to go for colorful blues rather than the dulcet grays of regular Sandy Bridge iterations.  The front screen displays a few important details: motherboard, BIOS version, CPU, CPU speed, memory and memory speed.  It would be good to see some temperature and voltage values, as seen on some other BIOS implementations.  However the new area on this main screen is under the ‘System Browser’ option:

Here we have an overview of the specific board in question.  As you mouse over all the different areas of the board (such as memory, and PCIe slot, SATA ports or I/O panel), a description of what is in there is shown underneath.  If there are specific options related to that section, clicking the area will bring up those options.  This is a nice effect, similar to what we have seen on other BIOS implementations – what would be ideal is if ASRock made this their intro screen into the BIOS, with an ‘advanced’ mode giving the menus underneath.

In terms of BIOS options, neither the X79 Extreme4-M and X79 Extreme4 have anything out of the ordinary.  By default, the SATA ports are set to AHCI (which is a good thing for almost every new HDD/SSD sold in the past few years), but PCIe slots are set to PCIe Gen2.  This is purely for compatibility at this time – when we get PCIe 3.0 capable cards, users will have to adjust these options manually to get the best performance.

One area of concern with the BIOS is some of the other ASRock defaults.  I point specifically to the fan settings.  By default, the CPU fan is set to max, full on 100%, no matter what the temperature.  For users who want to be careful of noise, this is a bad thing.  ASRock have told me that this is set by default so that the user has no temperature issues arising from using sub-standard cooling.   Also of note is that the fan on the PCH is set to be active when the PCH is at 50 degrees Celsius.  This was inaudible over my Intel All-in-One Liquid cooler set at default, and GPUs, when on an open test bed.

For overclocking, the OC Tweaker screen is the place to be.  As we have seen previously, overclocking on Sandy Bridge-E is performed either by the multiplier, or by changing the CPU gear ratio/base frequency.  However ASRock have made their BIOS empty of gear ratio – the gear ratio is automatically changed when a user adjusts the base frequency.  This is a different tack to almost all other motherboard manufacturers, as users who do not know how to overclock Sandy Bridge-E may find themselves to be limited in overclock to 105-110 MHz, then not get a bootable PC again until 120-125 MHz (relating to the 1.25x CPU gear ratio) without knowing why.

ASRock have included CPU multipliers, CPU base frequencies, Memory straps (including XMP), power limits and turbo options in the OC Tweaker screen.  However, to adjust the voltages for the CPU and memory, the user must navigate to the Voltage configuration.  CPU voltage is able to be changed by offset or to an absolute value, and here we also get options to adjust Load Line Calibration.  Memory subtimings also have their own menu, however I would like to propose a change to this screen, and make it also show the SPD information for the memory at hand, including subtimings and JEDEC values.

ASRock over the past 24-30 months have slowly been licensing an array of software for use on their boards.  Their eXtreme Tuning Utility (AXTU) has been a staple for a while now, which contains a Hardware Monitor, Overclocking options, Fan Controls, Energy Saving options, and BIOS sharing.  As I have said previously regarding AXTU in previous reviews, while it is for the most part functional, it is not the most aesthetically pleasing bit of software.  There are perhaps different ways of displaying the data which could be more useful, and the fan controls can be a bit confusing, as we do not have the standard ramping topology as seen on other motherboards. 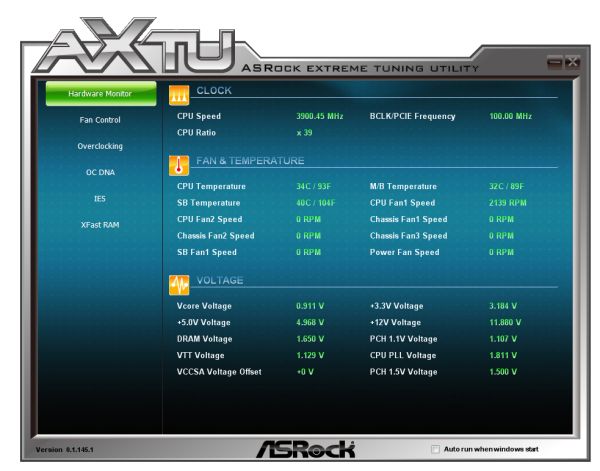 We have also seen some of the other software on previous boards:

XFast USB is a software implementation that ASRock have licensed which adjusts the Windows driver to improve USB speed by allowing a form of multi-threading for copying.  We usually see a good speed up using this software, in terms of pure throughput over the USB bus, as well as in our copy time tests.  The downsides however are that it only works on one USB device at a time (either USB 2.0 or USB 3.0), and when a device is plugged in for the first time, Turbo mode will only be applied if the device is removed and plugged in again.

XFast LAN is something ASRock debuted on their A75 Llano boards.  This is another piece of licensed software, available for €15.90 on non-ASRock boards. XFast LAN hooks into the networking drivers and NIC to give the user ‘complete’ control – the network traffic can be monitored (IP addresses, TCP, UDP, etc), shaped, prioritized, and many other features besides.  Arguably, this software causes more CPU usage; however that should not be much of a problem on any X79.

The new bit of software in ASRock’s arsenal is XFast RAM, found as part of AXTU:

To start, I should advise everyone who wants to use this to update to the latest version of AXTU, available on the ASRock website, for full usage under 64-bit Windows.

The main area for XFast RAM is under 32-bit Windows, where the software promises to unlock the area beyond the 3.2 GiB limit of 32-bit in the form of a RAMdisk.  With the XFast RAM software, users can shift certain parts of the OS to the RAMdisk, such as the memory pagefile, temporary files, IE/Firefox cache files, and WinRAR temporary files.  Under 64-bit, this software will make a RAMdisk out of the available memory to do this.

This is initially a good idea, though I doubt that X79 users will be installing a 32-bit OS, especially with quad-channel memory in play suggesting >3.2 GiB memory as standard.  For 64-bit, and users not using SSDs, the RAMdisk does offer that extra bit of speed for cache files and, ideally, pagefiles.  I was able to create an 8 GB RAMdisk while using 16 GiB of memory, however I did not see any change in WinRAR speed with it in use.