The USB 3.0 front panel is the same one we saw back in January 2010 bundled with the ASRock P67 series - a nice addition I've always liked, because it comes with an SSD holder too.  With this in the case, there is still one USB 3.0 header free on board for USB 3.0 enabled cases.  The Game Blaster is as shown - a PCIe x1 card that lights up red, and contains four audio outputs, as well as a Broadcom NIC and SPDIF outputs.

As mentioned earlier in the review, the extra SATA ports are a good addition.  The audio for this board is an upgrade compared to every X79 board we've tested so far, so much so that it is transferred onto the PCIe x1 Game Blaster add-on, with the second Broadcom NIC.

ASRock is going the way of ASUS, in terms of combining almost all their software elements for the board into one package - in this case, we have the ASRock eXtreme Tuning Utility (AXTU), alongside the other licensed software used by ASRock - XFast LAN and XFast USB. 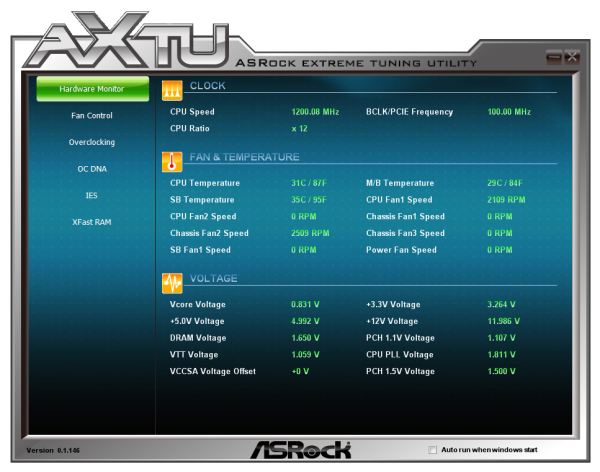 The AXTU software isn't as elegant as ASUS' solution - upon opening the hardware monitor greets you with CPU speeds, temperatures, fan speeds, and voltages.  The fan control section is essentially a reworking of the BIOS fan controls without any extra advantages.  The overclocking section is interesting, as the CPU Ratio adjust needs to be enabled in the BIOS for a user to apply any changes in the OS.  BCLK changes require a reboot, and only the first change per boot is stored in BIOS.  The CPU and VCCSA voltages are all offset based - personally I'd prefer absolute values as an option as well.  Also included are the OC DNA submenus (for saving fan/OC profiles), Intelligent Energy Saver which attempts to optimize CPU voltage, and XFast RAM.   I covered XFast RAM in my last ASRock review - it allows 32-bit users to use the memory space beyond the 3.2 GiB limit imposed by a 32-bit OS, or it allows 64-bit users to use some of their memory as a RAMDisk, and so by moving temporary files over to the RAMDisk it should help speed up the system.

XFast USB is a utility which implements its own USB tool for one plugged in USB device, in order to speed up transfers.  In the past, we've seen this increase both peak throughput and general copy times.  At some point though, ASRock should allow this to stretch to all the USB ports on a system, rather than just one at a time.

XFast LAN is another tool licensed by ASRock, more commonly known as cFosSpeed which retails at 10 Euros.  It allows your internet usage to be monitored and shaped, giving priority to user selected transfers (e.g. video streaming, gaming, VOIP), while other network usage may be occurring (file transfer, downloads).