Breaking the card down as we always do, we’ll start with the fundamentals of the card. As we typically see with these premium overclocking cards, the GTX 680 Classified is far bigger than a standard GTX 680. EVGA is still using a double-wide design, however with the need to fit additional VRM circuitry for overclocking the card is longer and taller than a standard GTX 680. Altogether the GTX 680 Classified measures 11 inches long and 4.95 inches tall, making it roughly an inch longer and an inch taller than NVIDIA’s reference design. Consequently this definitely isn’t a card that will fit in every case – its length should fit in most cases, but depending on the case its height may be an issue. 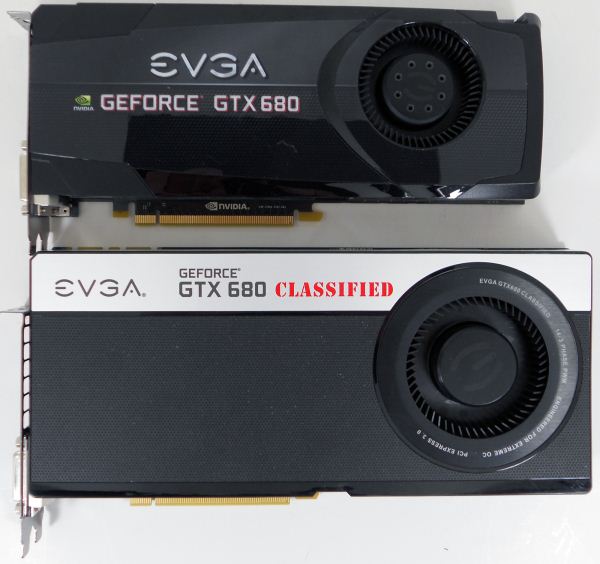 Along with giving EVGA additional space on their board for power circuitry, the larger card also lets them use a larger cooler, which is necessary for the higher power levels the GTX 680 Classified is intended to operate at. EVGA is well known for their use of NVIDIA’s reference designs, but even when they strike out on their own they like to stick with blowers, making the GTX 680 Classified one of the few custom cards you’ll see with such a cooler.

And like the board itself the cooler is equally large, with EVGA affixing a 80mm radial fan to the card. As with axial fans, radial fans can move more air as they increase in size, which means that not only can EVGA push more air than a standard GTX 680, but they can also do so at lower RPMs with less noise. In fact the card’s fan speed is limited to just 55% in order to pass NVIDIA’s noise requirements, which means it doesn’t get the chance to reach the full potential of what this 24W fan can do. 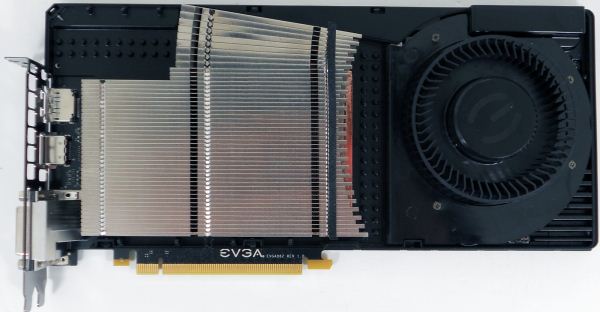 On the other end of the cooling equation we have EVGA’s heatsink, which like the fan takes advantage of the larger card in order to fit a larger heatsink. This heatsink is a larger version of the stacked fin heatsinks we’ve seen NVIDIA use as of late, with a combination of a copper baseplate and a flat copper heatpipe providing transport to the rest of the aluminum heatsink. Truth be told compared to full-card heatsinks we often see on open-air coolers these stacked fin heatsinks are not particularly big, but these designs prove to be quite efficient as we’ll see.

Sitting below the primary heatsink is EVGA’s aluminum baseplate, which primarily serves to reinforce the card and protect the components, with a secondary duty of serving as a basic heatsink for the RAM and VRM circuitry. We’ve seen these baseplates take on heatsink-like features before – such as with the GTX 690 and its grooves/fins – but this is the first baseplate we’ve seen that uses pin fins instead of full fins.

Last but not least of course we have the real star of the show, EVGA’s custom PCB. As we alluded to earlier, the bulk of the additional bulk of the PCB is used to house extra VRM circuitry, leading to the back-half of the PCB being densely populated while the front half of the PCB is effectively empty along the top-inch. EVGA is using a 14+3 phase VRM configuration here, with 14 phases supplying power to the GPU while 3 more phases supply power to the GDDR5 RAM.  This is as compared to a 4+2 configuration for the reference GTX 680. 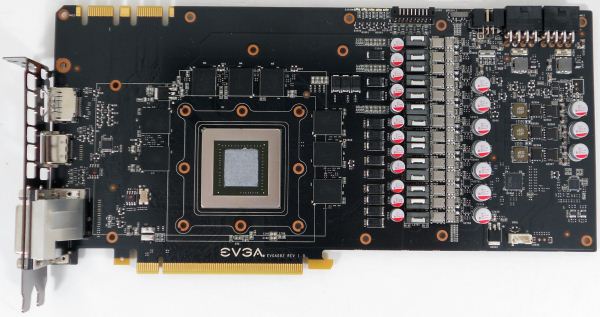 VRM phases have become something of a competition between vendors, and while it’s not immediately clear whether 14 VRM phases are strictly necessary for this card, going above and beyond the reference GTX 680 certainly is. Not only are the additional phases necessary to smoothly supply power to the GPU and RAM when overclocking (and especially overvolting), but even at its stock state EVGA needs the extra phases thanks to the card’s higher default power target. EVGA’s default power target on the GTX 680 Classified is 250W (330W if using +132% power target), versus 170W(225W w/+132%) on the reference GTX 680; this not only provides some headroom for overclocking, but it means the GTX 680 Classified can reach its top boost bin more often as it doesn’t have to clock down to stay within the 170W power envelope.

Supplying this power is a pair of 8pin PCIe power sockets, which means on paper the GTX 680 Classified can safely draw up to 375W. In practice it’s not clear whether GK104 can actually take that, at least with air cooling, so pushing this card much beyond 300W is mostly in the realm of hardcore water and liquid nitrogen overclockers. Still, the GTX 680 Classified is meant to be overclocked and it definitely has the power delivery system necessary to achieve it. 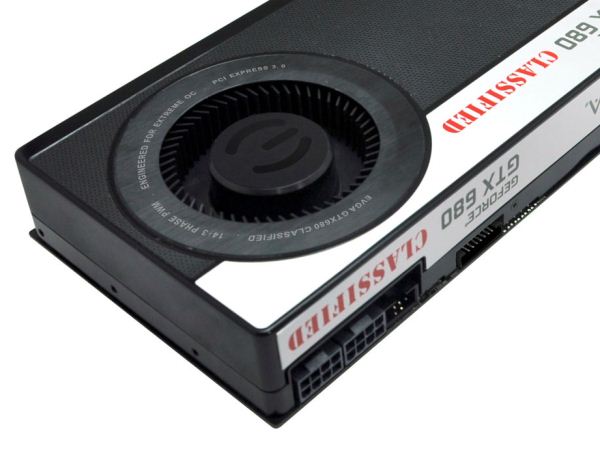 This brings us to EVGA’s additional features on the PCB specifically for overclockers. First and foremost, to the right of the 8pin PCIe power sockets is the EVGA EVBot header. We will get into EVBot in a moment when we discuss voltage control in general, but this header is the key to maximizing the GTX 680 Classified’s potential. Further to the right we find EVGA’s BIOS selection switch, which has 3 states: Normal, OC, and LN2. The latter 2 BIOSes are in fact identical and exist to disable the card’s power target to enable extreme overclocking. In our (admitted conservative) experience disabling the power target is best left to water and LN2 overclockers, as the default BIOS seems to offer enough headroom (and heat generation) to keep the reference cooler busy.

Moving on, further still to the right we have a voltage monitoring header. Unfortunately the pins are not labeled and difficult to access with probes, as EVGA is intending for the header to be used with not-yet-released adapter that will make it easier to attach probes. Without the adapter a combination of EVBot and software monitoring are the best way to monitor the card’s voltage.

With overclocking out of our way, let’s take a look at the rest of the card. The GTX 680 Classified is a 4GB card, which means EVGA is using 16 GDDR5 RAM chips in a 16bit configuration. 8 are on the front, with the other 8 on the rear. These are the same 6GHz Hynix chips we saw on the GTX 680, and this explains why EVGA isn’t shipping with a memory overclock. As near as we can tell neither Samsung nor Hynix are actually shipping 6.5GHz/7GHz GDDR5 in volume, which would mean that EVGA cannot put faster RAM on the card (though they could still overclock).

Finally we have the GTX 680 Classified’s display port configuration. EVGA is using NVIDIA’s reference configuration here, which means 2 DL-DVI ports, 1 DisplayPort, and 1 HDMI port. The HDMI port is admittedly a bit of a head scratcher – we can’t seriously imagine anyone using such a card to drive a TV, but there you go. EVGA has put the EVBot header here on previous Classified cards, and that may have been a better use of that space in this case.

Wrapping up our look at the GTX 680 Classified, let’s talk about marketing, pricing and availability. One of the things we almost immediately asked EVGA about the GTX 680 Classified is what market segment they‘re shooting for, since ultra-premium is a rather broad category. The GTX 680 Classified is very much a halo part for EVGA, and while it will grab the attention of the press and fans with headlines like hitting 2GHz on LN2, EVGA tells us that most buyers will stick to air cooling. So while the card was built for insane overclocks and abuse on water and LN2 cooling, EVGA clearly expects to sell many of these cards to buyers that will never go beyond the card’s shipping configuration.

Moving on to volume and pricing, Classified cards are usually low-volume parts. Despite that the card has regularly been available from EVGA, so all indications that are the volume of cards is high enough for the market segment EVGA is going after. The toughest part to get over will be pricing: the GTX 680 Classified is a premium variant of what was already a premium product (GTX 680), so EVGA is charging a premium price. The GTX 680 Classified will set you back $660, making it the most expensive GTX 680 currently available. Much of this price hike comes down to the RAM – 4GB GTX 680s start at $590 on Newegg – but even then there’s a further premium thanks to the customized hardware and the fact that this is EVGA’s highest factory overclock. Compared to their next-cheapest 4GB GTX 680, the GTX 680 FTW+, the Classified still carries a $40 premium.

Of course, this doesn’t include the cost of the EVBot controller. If you want one of those – and if you’re intending to overvolt you will – you’ll need to shell out an additional $80, which brings the price of an entire GTX 680 Classified kit to $740. If the hardware isn’t a strong argument that the GTX 680 Classified is an ultra-premium product, the pricing will be an even better argument.