I don't normally comment on earning's calls, but this is something I've been talking a lot about in meetings offline so I decided to write up a short post. Yesterday NVIDIA announced its Q2 earnings. In short, they were good. Total revenue was up to $1.04 billion and gross margins were healthy at 51.8%. The more interesting numbers were in the breakdown of where all of that revenue came from. NVIDIA reports on revenue from three primary businesses: GPU, Professional Solutions and Consumer Products. The GPU business includes all consumer GPUs (notebook, desktop and memory - NVIDIA sells GPU + memory bundles to its partners) as well as license revenue from NVIDIA's cross licensing agreement with Intel. The Professional Solutions business is all things Quadro and Tesla. Finally the Consumer Products business is home to Tegra, Icera, game console revenue and embedded products.

I plotted revenue across all three businesses going back over the past 2.5 years: 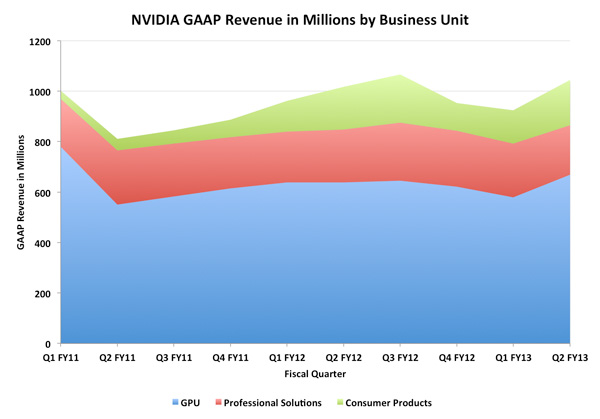 The quarter that just ended was NVIDIA's second quarter for fiscal year 2013 which is why the quarter stamps along the x-axis look a bit forward looking at first glance. Going back two years ago, the consumer products business was virtually nonexistent. Two years ago NVIDIA's consumer products sales were one quarter what they are today. The growth in the Tegra space has been steady since then, but late last year it saw a bit of a fall off (Tegra 2 wasn't exactly competitive in the second half of 2011). NVIDIA boasted healthy growth this quarter thanks to some fairly high profile Tegra 3 design wins, but the overall revenue for the consumer products group is still below its $191.1M peak three quarters ago. There's still a lot of hope for the business and it's definitely healthier than it was a couple of years ago, but there's still a long way to go. Ultimately NVIDIA needs to produce designs competitive enough to last until the next design cycle, and not taper off early. Tegra 2 was late to market and thus its competitive position was understandable at the end of 2011. Tegra 3 did a lot better but the real hope is for its Cortex A15 based successor, Wayne.

As it stands, Tegra (and the rest of the consumer products group) is responsible for 17.2% of NVIDIA's total quarterly revenue. That's hardly insignificant. If more PCs move over to processor graphics in lieu of discrete GPUs, Tegra will need to grow even more to make up for that loss. I have been concerned about the margins NVIDIA gets out of its Tegra parts. OEMs in the ARM mobile space expect to pay below $30 for close to 100mm2of silicon. As a result, margins on a chip like Tegra are no where near what they are on a high-end GPU. The question is, are they competitive with entry level discrete GPUs? It's still too early to correlate increases in Tegra revenue with an impact on gross margins, but so far there's nothing to complain about: 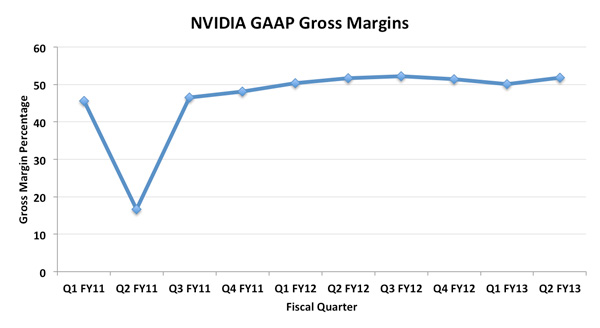 The dip back in Q2 FY11 has to do with bumpgate, but if we look at Q3-FY12 and Q2-FY13 gross margins remained healthy during Tegra's two biggest quarters. This isn't enough data to conclude for sure that Tegra is selling at good margins, but it's promising for NVIDIA as a whole for now. Today NVIDIA's 28nm GPUs are selling at what appears to be very healthy margins. NVIDIA seems to have no problem selling nearly everything they make, at very good (for NVIDIA) prices. It's entirely possible that better than average GPU margins can help offset lower Tegra margins. It's also possible that both the GPU and consumer products businesses enjoy healthy margins.

At the end of the day, NVIDIA had a good quarter and Tegra remains an important part of the business. NVIDIA has a couple of high profile design wins with Tegra 3 in Windows 8 devices later this year, including Microsoft's Surface tablet. The real question is how good will Wayne be next year. What I've heard thus far is promising, but I don't have any hard data yet. I suspect we'll also really begin to see the impact of processor graphics integration next year with Haswell. NVIDIA doesn't break down GPU revenue by market segment so it's unclear how much of a loss the consumer products division would have to cover should more OEMs choose to leave discrete GPUs out of their systems.

The good news for NVIDIA is the high end (and quite profitable) GPU market is likely safe for the near future. The question remains how big of an impact we'll see at the entry level and lower midrange segments. A lot of that really depends on the success of Ultrabooks, Windows 8 tablets and other ultra small form factor machines that may not prioritize discrete GPUs.

For now it's clear the Consumer Products group and Tegra has legs. NVIDIA's margins and revenue have improved over the past two years but there's a lot of room to grow on the back of smartphones and tablets. NVIDIA has done surprisingly well with Tegra over the past couple of years, especially in the face of some very strong qualcompetition. We'll find out soon enough if Wayne has what it takes to give NVIDIA's Consumer Products business its first $200M+ quarter.