In and Around the iBuyPower Valkyrie CZ-17

Say what you will about the iBuyPower Valkyrie CZ-17, but say this: it's not exactly a looker. Utilizing a slightly modified MSI GT70 chassis, it's unfortunately still a poster child for why many Taiwanese firms (outside of ASUS) still can't quite seem to catch fire on western shores. The aesthetic is gaudy in places, chintzy in others, and unfortunately just don't gel. Alienware notebooks may not be everyone's cup of tea, but they have a consistent, clear aesthetic and they don't look cheap.

That lack of attention to aesthetics is evident on MSI's own GT70 page, which overflows with features but only remarks on the keyboard's backlighting. iBuyPower has done what they can to mitigate it; the plastic lid features two glowing stripes and a glowing iBuyPower logo, while the rest of the chassis is largely matte black plastic. Thankfully, glossy plastic is kept to a minimum, confined to the inner bezel of the display, the keyboard bezel, and the touch-based control strip above the keyboard.

The control strip is one of the other aspects that's different on iBuyPower's build; the MSI version has a stripe, logo, and an oversized power button, but the iBuyPower version is much cleaner. The touchpad buttons are the other place where a change has been made, but this time it may not be for the better; two dedicated buttons and a backlit accent have been replaced by a larger backlit accent and essentially a single rocker for the left and right click. It's cleaner looking, but less functional.

These complaints are all before you get into the staggering 2.2" thickness of the notebook, but I would argue that thickness plus its wedge shape help it to run both cooler and quieter than the competing Alienware M17x R4, so I take it as a wash. The bottom line as far as aesthetics is that the CZ-17 is by and large not for show. Thankfully it has a great personality. 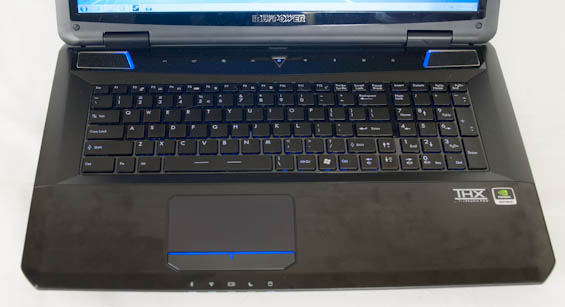 The two places where the CZ-17 excels are two of the aspects that matter most: the keyboard and the display. The keyboard appears to still be using MSI's licensed SteelSeries design, and it has a depth and feel to it that's miles ahead of the other gaming notebooks I've used. Mechanical keyboards just aren't going to happen in notebooks, but I was pleasantly surprised at the tactile response of the CZ-17's. The backlighting is also configurable similar to Alienware's. Where it takes a hit is the layout, which gives Insert, Pause/Break, and Scroll Lock dedicated keys while forcing Page Up and Page Down to share with Home and End as Fn combos. There are other quirks to the keyboard's layout, but essentially it appears to just be an international skeleton that's barely customized to a North American layout; there's a backslash key both above the Enter key and next to the spacebar, where the key next to the spacebar would be an alphabet toggle on East Asian keyboards. Despite my misgivings with the layout, though, the keyboard remains very comfortable to use.

The CZ-17's other victory is the display. MSI's CZ-17 appears to use the same panel as the Samsung Series 7 that we looked at last week, and it was one of the highlights of that laptop. While the measurements are solid if not exceptional, and we're still on a TN panel, it's nice to see a matte display on a gaming notebook after coping with the glossy display on my M17x R3 for so long. The M17x R3's glossy edge-to-edge surface photographs great and seems cool initially, but its reflective nature and penchant for picking up fingerprints and dirt makes it problematic over time.

Ultimately I continue to be disappointed by the relatively cheap plastic used for the majority of the shell. It still feels much more solid than older Clevo units did, which were powerful hardware in a candy shell, but the CZ-17 just isn't that much fun to look at. Like I said, though, the display and keyboard are excellent and I find the notebook to be very comfortable to use in practice.