Last week we met with Acer to go over the fall product stack, and we’ll have a bunch of announcements over the coming two weeks all leading up to the late October launch of Windows 8. We start off today with their S7 Ultrabooks, Acer’s highest tier of Ultrabooks. We’ve previously reviewed Acer’s Aspire S3 and more recently the Aspire S5, but the S7 goes all-in on build quality, materials, and design.

The S7 will be available in both 11.6" and 13.3" flavors. Both models feature an all-aluminum unibody design, but the top cover material differs between the two. The 11.6" model has a brushed aluminum top cover, while the 13.3" model uses Gorilla Glass 2 as its outer surface. On the underside of the machine is a soft touch, smartphone-like plastic finish.

The materials look and feel great in person. I was particularly impressed by the glass on the 13.3" model. The two chassis are also some of the thinnest Ultrabooks we’ve ever encountered, measuring 0.47”/0.48” (11.9/12.1mm) thick. The 13.3” models also feature a 180 degree hinge that allows the LCD to lie flat on a table, desk, or other surface where it can function as a typical tablet. 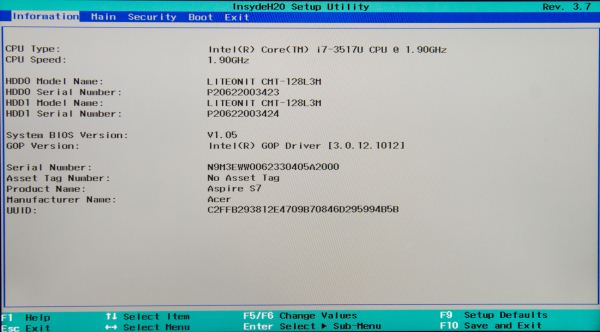 Some of the key features of the S7 series are the touch enabled 1080p displays on both 11.6” and 13.3” models, Intel 3rd Generation Core i5 and i7 processors, and pure SSD storage solutions. At least for the 256GB model it appears that Acer is using two Lite-On CMT-128L3M SSDs in RAID-0. Lite-On's drives use a Marvell controller similar to the Plextor M3 series.

The displays looked great in person, with subjectively very good brightness, contrast and viewing angles. We'll have to get the S7s in house to truly evaluate the performance of the panels however. 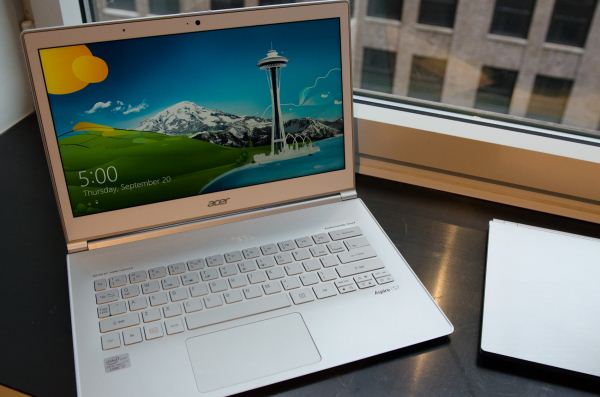 The keyboard on both models felt good although the lack of a dedicated row of function keys seemed odd. Also impressive was the trackpad performance which didn't exhibit any of the usual issues we've seen from Ultrabooks thus far.

The 13.3” S7-391 will be available in two models initially, one with an i5-3317U processor and a 128GB SSD for $1400 with the second featuring an i7-3517U processor and a 256GB SSD for $1650. The S7-391 weighs 2.86 lbs. (1.3kg). The smaller S7-191 includes the same i5-3317U CPU and 128GB SSD but weighs just 2.29 lbs. (1.04kg) and will cost $1200. Both models also feature backlit keyboards with an ambient light sensor that will adjust the backlight levels appropriates. Battery life is a bit of a question still, as Acer quotes up to 12 hours with an optional battery; we don’t have details on the optional battery or the default battery configurations, unfortunately. Note also that both models feature 4GB DDR3 memory that’s soldered onto the motherboard; we’d really like to see 8GB these days, especially considering the cost and the inability to upgrade should you desire additional RAM in the future.

The full specs for the three announced models are below. Also be sure to check out our hands on video from IDF last month, also below.