We already posted our overview of the 12.11 Catalyst drivers when used with desktop GPUs, but notebook users are naturally wondering where the promised mobile Hotfix driver is. The short story is that AMD decided to roll the Hotfix into the 12.11 release, so this driver takes care of both mobile and desktop users. The usual caveats for notebooks apply, obviously: your laptop needs to use either a discrete-only GPU or support dynamic switchable graphics aka Enduro, and the laptop manufacturer needs to be a participant in AMD’s mobile drivers program. I’m not sure what companies are specifically opting out, but at least the beta driver I tested installed on a Sony VAIO C (more on this below).

With the official release in hand, we went back to verify performance was the same as the 12.9 Hotfix we had tested previously. In the process of testing, we found things were not quite where we expected, but then AMD contacted us to let us know there was a slight snafu with the 12.11 driver: it doesn’t include the DX9 portion of the Hotfix (which, if you missed it, we had to manually install the DLLs in safe mode with the not-for-public driver). That’s unfortunate, as it potentially means any DX9-only games will underperform relative to the earlier Hotfix, but that’s not the end of the story.

Besides the apparent DX9 snafu, we also ran into issues with several games no longer working properly. DiRT 3 and DiRT Showdown both refuse to run in fullscreen mode with the 12.11 beta, which makes comparing performance with the previous scores largely useless (windowed mode is always going to be slower, in my experience). Battlefield 3, which received a large performance boost on desktops with the 12.11 drivers, also refuses to run—it crashes/hangs almost immediately after launching. (It might be the same fullscreen bug as in the DiRT games, but there’s no XML config file to tweak to change settings so basically I’m unable to test BF3 at present.) Update: I had to uninstall the AMD drivers, reboot, reinstall AMD's drivers, reboot, and then reinstall Intel's iGPU drivers. Then things worked more or less properly.

Of the remaining games, we found minor differences in performance but nothing really worrisome; if you’re still running the original Clevo 7970M drivers, the Hotfix should be a dramatic step up in performance. What about other non-7900M laptops, though? As mentioned above, I installed the 12.11 beta from AMD on the Sony VAIO C (PowerXpress 4.0/Dynamic Switchable Graphics) and that worked “okay”; the issue is the same as with the 12.9 Beta driver: the “Global Switchable Graphics” settings are missing, and if you try a clean install (i.e. uninstall the Sony provided AMD and Intel drivers and then install the latest version of both), well, I couldn't get the 6630M to work properly. I’m not sure how much the new drivers help performance with other GPUs, but a quick look at performance on the VAIO C suggests that only GCN GPUs are likely to show noteworthy improvements. 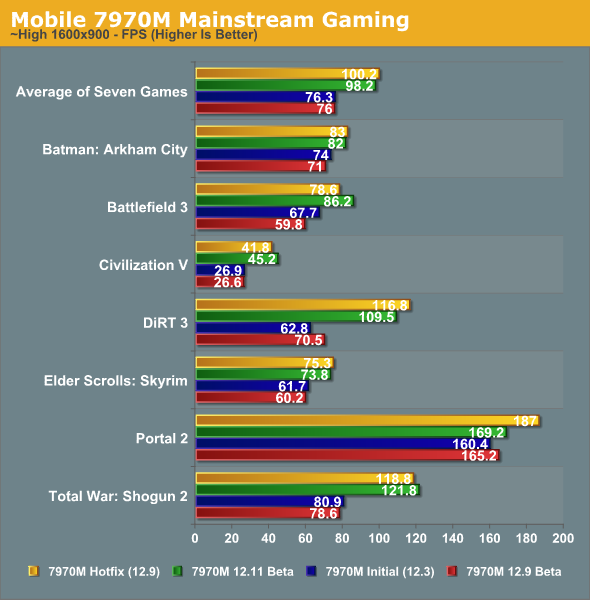 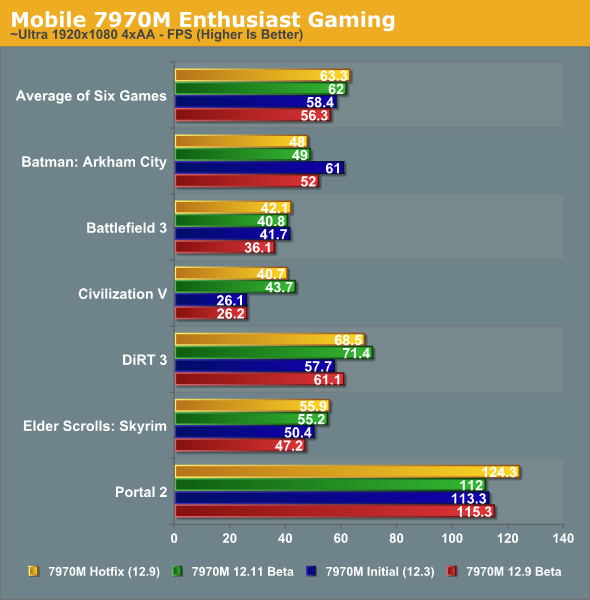 Performance is down slightly from the Hotfix internal release, but that’s not too surprising given the missing DX9 support. Overall, our Mainstream settings show a pretty clear benefit from the Hotfix/12.11 drivers, while the increases at our Enthusiast settings are less dramatic but still tangible in most titles. Unlike on desktop cards where Tahiti/7900 showed the largest improvements at 1920x1200, here the Pitcairn-based 7970M benefits more at 1600x900. If we're seeing the same shading/texturing improvements, that would make sense: one step down from Tahiti means one step down in resolution for optimal quality. We also see performance higher than the earlier Hotfix in Civ5, Battlefield 3 at Mainstream, and DiRT 3 at Enthusiast settings.

The drivers have now posted on AMD's site. Note that these are beta drivers and thus you don't go through the usual "mobility driver download utility"; all of the necessary hardware IDs are already present in the INFs. AMD also informs us that they’re working to push out a fixed mobile driver “shortly” that will include the DX9 improvements as well. I would hope that will bring the 12.11 release to the performance level of the 12.9 Hotfix, and hopefully AMD can address the issues with laptop support on older Enduro/Dynamic Switchable Graphics laptops.

Looking at the bigger picture, this release shows that AMD can push out public drivers for mobile platforms, including Enduro systems, but we’re still seeing some disconcerting trends with overall mobile platform support. We want the next official release to clean up the drivers on all Enduro/Dynamic notebooks (e.g. Sony VAIO C and HP Envy 15, to name two specific models where we’ve heard the same “missing Global Switchable profiles” complaint), and it would be great if we didn’t have to uninstall then reinstall drivers to get things functioning properly (i.e. the initial issues with Battlefield 3 and DiRT 3). NVIDIA hasn’t been free of such issues, but given the number of Optimus laptops we’ve tested compared to Enduro we’ve encountered problems far less frequently. Here’s hoping 2013 can be the year where we no longer have to delve into the question of which AMD notebooks work properly with AMD-provided drivers.