Kabini is a difficult SoC to evaluate, primarily because of the nature of the test system we're using to evaluate it today. Although AMD's Jaguar cores are power efficient enough to end up in tablets, the 15W A4-5000 we're looking at today is a bit too much for something the size of an iPad. Temash, Kabini's even lower power counterpart, will change that but we don't have Temash with us today. Rather than wait for AMD to get us a Temash based tablet, I wanted to get an idea of how Jaguar stacks up to some of the modern low-power x86 and ARM competitors.

To start, let's characterize Jaguar in terms of its performance compared to Bobcat as well as Intel's current 32nm in-order Saltwell Atom core. As a reference, I've thrown in a 17W dual-core Ivy Bridge. The benchmarks we're looking at are PCMark 7 (only run on those systems with SSDs), Cinebench (FP workload) and 7-Zip (integer workload). With the exception of Kabini, all of these parts are dual-core. The Atom and Core i5 systems are dual-core but have Hyper-Threading enabled so they present themselves to the OS as 4-thread machines.

The single threaded 7-Zip benchmark shows only mild gains if we don't take into account clock speed differences. If you normalize for CPU frequency, Jaguar is likely around 9% faster than Bobcat here. Multithreaded gains are quite good as well. Once again, Atom is no where near AMD's new A4.

The Ivy Bridge comparison is really just for reference. In all of the lightly threaded cases, a 1.7GHz Ivy Bridge delivers over 2x the performance of the A4-5000. The gap narrows for heavily threaded workloads but obviously any bigger core going into a more expensive system will yield appreciably better results.

For the next test I expanded our comparison to include an ARM based SoC: the dual-core Cortex A15 powered Samsung Exynos 5250 courtesy of Google's Nexus 10. These cross platform benchmarks are all browser based and run in Google Chrome: 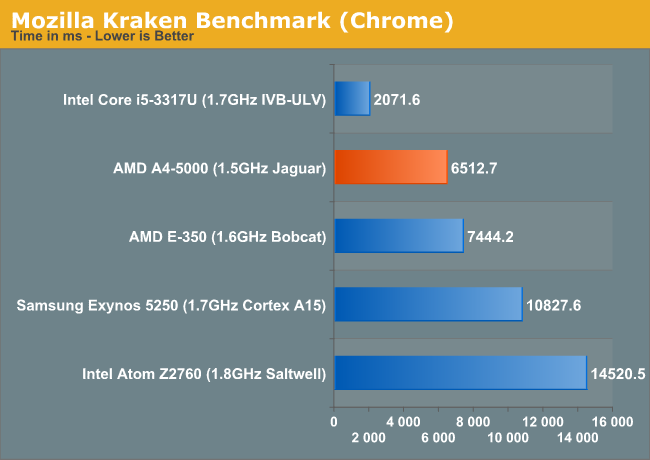 Here we see a 14% improvement over Bobcat, likely closer to 20% if we normalized clock speed between the parts—tracking perfectly with AMD's promised IPC gains for Jaguar. The A4-5000 completes the Kraken benchmark in less than half the time. The 1.7GHz Ivy Bridge part is obviously quicker, but what's interesting is that if we limit the IVB CPU's frequency to 800MHz Kabini is actually a near identical performer.

Jaguar seems to be around 9-20% faster than Bobcat depending on the benchmark. Multithreaded workloads are obviously much better as there are simply more cores to run on. In practice, using the Kabini test system vs. an old Brazos machine delivers a noticeable difference in user experience. Clover Trail feels anemic by comparison and even Brazos feels quite dated. Seeing as how Bobcat was already quicker than ARM's Cortex A15, its no surprise that Jaguar is as well. The bigger problem here is Kabini needs much lower platform power to really threaten the Cortex A15 in tablets—we'll see how Temash fares as soon as we can get our hands on a tablet.

Vulkan 1.3 Specification Released: Fighting Fragmentation with Profiles AT Deals: Intel Core i3-10105 CPU Down to $105 at Newegg