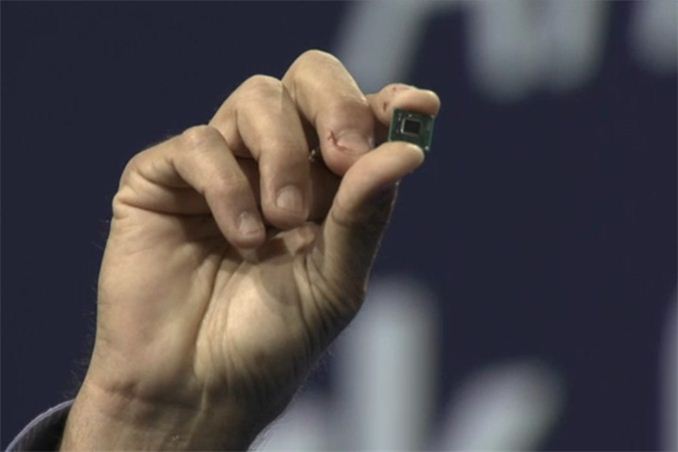 Kicking off today is the 2013 Intel Developer Forum, Intel’s annual gathering of developers, press, and techies. Among the many sessions scheduled over the rest of the week we’re expecting several product announcements, and as is customary the first few of these announcements have been dropped in this morning’s opening keynote, being delivered by Intel’s new CEO, Brian Krzanich.

The first – and certainly hottest item – is the announcement of a new line of SoCs from Intel. Dubbed the Quark family, these SoCs will be slotted in below Intel’s existing and future Atom products, being designed with a strong emphasis on size and power consumption. Intel isn’t giving the press any hard numbers at this time, but they are throwing around the idea of one-fifth the size and one-tenth the size of their existing low-end Atom (Silvermont) CPU cores.

Update: Intel has sent over a quick clarification on size; the size comparisons are meant to be core-to-core rather than SoC-to-SoC. Specifically compared to the 22nm Silvermont core. 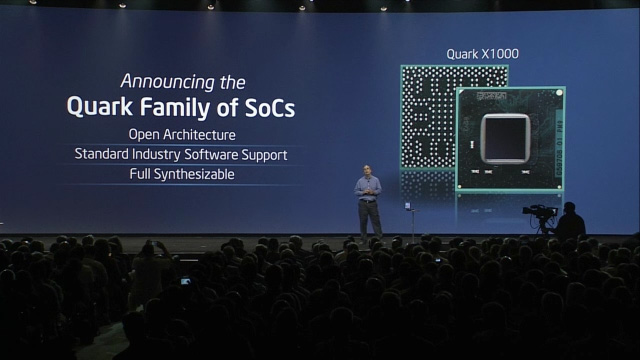 Being smaller, lower power, and less powerful than Atom, Intel will be chasing after the “internet of things” market with Quark products. With Atom covering tablets, smartphones, and similar devices, Intel is tasking Quark with covering the markets that traditionally use embedded microprocessors and other types of low power, low performance controllers. This would cover everything from wearable computers to smart watches on the consumer side, and any number of uses in industrial products as we already see today. Intel for their part isn’t going to be going into producing any such end user devices, but they are showing off some braclet-like devices as proof of concept reference designs at the show.

Looking at the specs and the use cases, although Intel doesn’t specifically name ARM as a competitor here, it’s clear that Intel is going after ARM’s other market segments to at least some extent with Quark. ARM’s Cortex M and Cortex R processor IP already competes in the spaces that Intel is naming for Quark, so there is some obvious overlap there. Furthermore ARM juggernaut Qualcomm has shown a clear interest in the “internet of things” concept and its potential to be the next explosive market, and have in turn been working on their own Cortex M based designs and sample products using them, such as the recently announced Toq smartwatch. 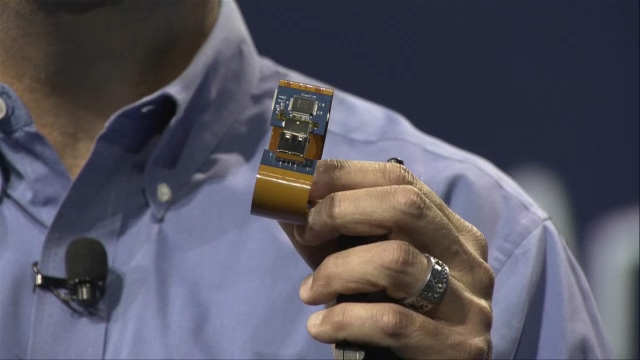 But perhaps the most interesting aspect of Quark is what hasn’t been said: architecture. Intel has not specifically named the architecture that Quark will be based on, which calls into question whether it will be based on x86 – like virtually all of Intel’s other microprocessors – or if they’re utilizing another architecture to meet the extreme size and power requirements of Quark. At the same time Intel is calling Quark an “open architecture” product, which is not a term they typically attach to x86. Hopefully we’ll be able to get Intel to talk more about the architecture once we hit the showfloor.

Update: Intel has confirmed to us that Quark's architecture is "Pentium ISA compatible", making it x86 for the purposes of the front-end.

Wrapping things up, alongside the announcement of Quark Intel has also briefly laid out their launch plans for the new SoC. As to be expected, Quark isn’t shipping yet. The first Quark product will be 32nm, with Intel  sampling reference boards based on that SoC in the 4th quarter, followed by a full release occurring at a yet-to-be-announced point after that. For the initial wave of Quark products Intel will be playing it conservatively, targeting existing industrial microcontroller users such as energy, transportation, and other general industrial segments. These are the markets where Quark is closest to a drop-in replacement, while Intel’s more ambitious vision for consumer markets will take further time to develop as their partners continue to work out product designs and where such an SoC makes sense. 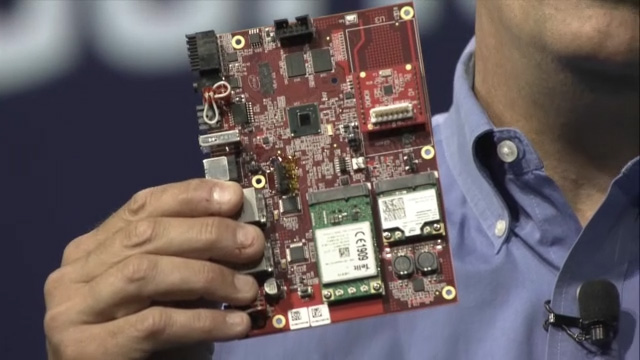