The Intel D54250WYK, unlike other off-the-shelf PCs, needs some components in order to complete the build. It is a barebones machine, in the sense that the power cord, RAM, storage as well as WLAN card need to be supplied in addition to the operating system. For the cost price, the user gets the motherboard (including CPU) and chassis, as well as a 65W (19V / 3.43A DC) adapter. The unit, however, has wired pigtail connections to the chassis sides for acting as the antennae for a WLAN card. The power cord needed is a C6 type that plugs into the power adapter's C5 type connector. The 3-plug C6 connector is also known as a cloverleaf connector. It does keep costs for Intel down, but it would have been really nice to localize this component to the country of sale. The kit also comes with a VESA mounting bracket. 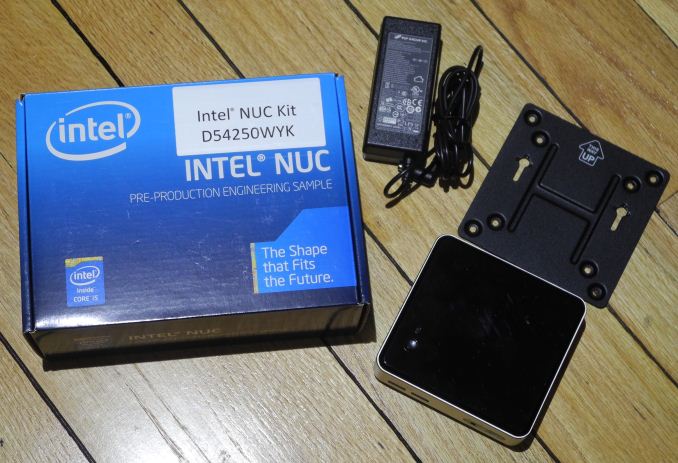 Building the NUC is incredibly simple. There are four screws that hold the chassis together and removing them gives access to the motherboard. From here the end user can install up to two 8GB DDR3 SO-DIMMs. The bottom mini-PCIe slot accepts a half height card (perfect for WiFi) while the top slot can take a full height card or an mSATA drive. The antenna pigtails for WiFi are already routed to the appropriate spot inside the chassis.

Intel sent along its mSATA SSD 530 (180GB), which is a SandForce based mSATA drive using 20nm MLC IMFT NAND. SandForce controllers work very well in mSATA form factors since they don't require any external DRAM. For the RAM, we have 2x 4GB CT51264BF160B SODIMMs from Crucial. Handling the WLAN side of the equation is the 7260HMW, Intel's dual band 2T 2R 802.11ac mini-PCIe card solution.

The soldered down CPU (Intel Core i5-4250U with the HD5000 IGP) and the fan / cooling system are on the other side of the motherboard, and not visible in the pictures above. On the same side, we have a HTPC header (with HDMI CEC) on the side of the CMOS battery (referred to as the 'custom solutions header' in Intel's technical documentation for the product). In addition to the mSATA port, we have a SATA port and a SATA power connector as well as a dual-port internal USB 2.0 header. The Nuvoton NCT5577D embedded controller acts as a hardware monitoring subsystem. The motherboard also has a CIR sensor in the front panel.

A view of the assembled system is also provided in the gallery above. One of the points to note is the presence of the thermal pad on the bottom cover right below the SSD / WLAN stack. In the first revision of the NUC, Intel faced some heat for messing up the thermals. In particular, high temperatures causes the SSD to stop working. These temperatures were the result of either high disk activity or heavy WLAN traffic. A thermal pad solution was provided for the original NUC after release of the product. With the Haswell NUC, the thermal pad solution comes pre-integrated. The fan speeds also seem to be a bit on the higher side throughout usage. Consumers used to fanless PCs are definitely going to be a bit upset with the constant hum from the unit, but we do have passive cooling solutions from third-party vendors (at the cost of system size).

The choice of components in our build have an approximate cost breakdown for the hardware as below. It is possible to hit lower price points with judicious choice of DRAM and SSD capacity.

On the software side of things, Windows 8 Professional x64 was installed without any hiccups. All necessary drivers were available on Intel's website. In addition to the host of benchmarking programs, we installed the Netflix Windows 8 app for evaluating streaming aspects. For the HTPC-related section, we installed MPC-HC v1.7.1 and madVR v0.86.11. Many users prefer XBMC as a one-stop interface for all HTPC activities. Some benchmarks were also run using XBMC v12.3.