I'm starting our performance section with gaming, as that's likely the most interesting part of this review. The Maxwell GM107 chip may not be NVIDIA's fastest GPU right now, but with some enhancements over Kepler and improved efficiency it could prove to be a great mobile solution. We have now tested GTX 880M (which is basically GTX 780M with slightly higher clocks), we have a GTX 870M notebook we're working on reviewing, and with the GE60 we can see where the "mainstream" GTX parts fall in terms of performance.

Compared to last generations GTX 760M, the 860M has slightly fewer CUDA cores (640 vs. 768), but they're clocked much higher (up to 1029MHz compared to 657MHz), leading to a potential performance increase of around 30%. Memory bandwidth has also improved by 25% over the GTX 760M, making for an overall much faster mobile GPU. The GTX 760M tended to be good for 1080p with medium to high detail settings, so the GTX 860M should be closer to 1080p high in most games.

For our tests, we look at 1366x768 Medium, 1600x900 High, and 1920x1080 Ultra (max quality with 4xAA). I won't include all of the results here but instead we'll focus on the "mainstream" (1600x900 with ~high settings) performance (update: with GeForce Experience 1080p as well). The full suite of results are available in Notebook Bench, as usual. Generally speaking bumping up to the native 1920x1080 resolution of the GE60 will reduce performance by 10-30%, depending on the title, so average frame rates of 45 FPS or higher with our Mainstream settings should equate to 30FPS or higher at 1080p. 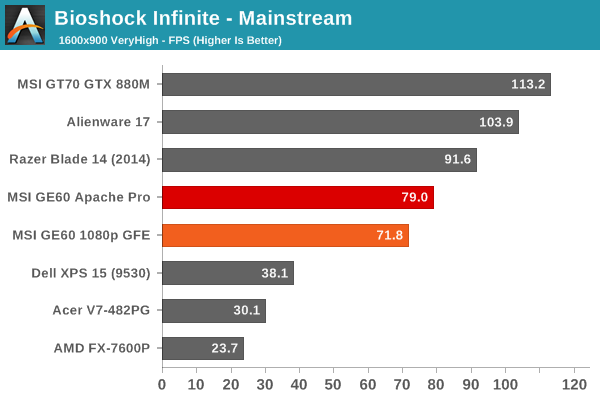 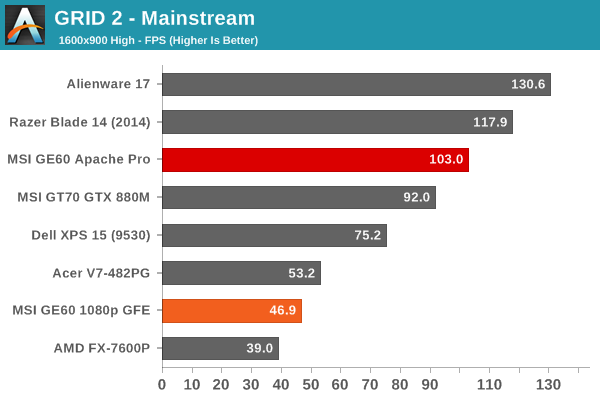 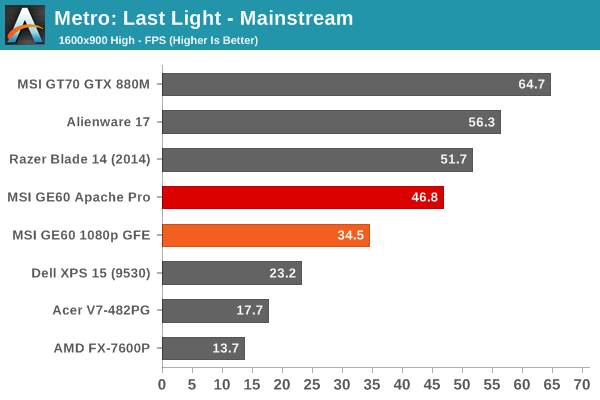 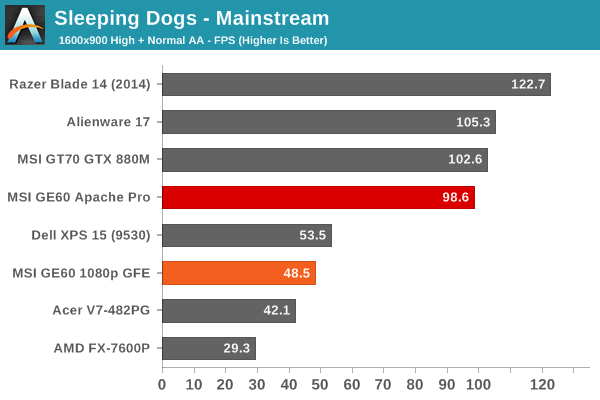 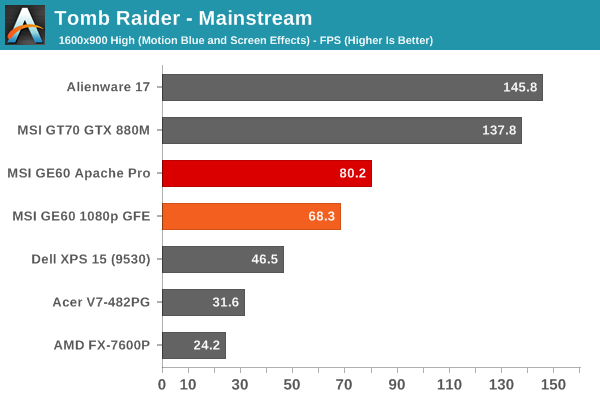 The results from our first mobile Maxwell GPU tests are quite promising; all of the games at Mainstream settings are well above 30 FPS, including the punishing Metro: Last Light; in fact, other than Metro all of the games are actually well above 60 FPS. There are other games that will hit the GPU hard, but few will be worse than Metro so for now we can be pretty safe assuming the GTX 860M will handle 1080p with high details while providing at least 30 FPS.

If you flip over to Notebook Bench, you'll note that our Enthusiast settings tend to be a bit much on a couple games – specifically Metro drops below 20 FPS, and Tomb Raider is just barely below 30 FPS. There's obviously going to be a need to balance the settings you choose to run at, but that's where NVIDIA's GeForce Experience comes into play. NVIDIA has a large automated setup that tests a bunch of games with a variety of settings, simulating all sorts of GPUs – including older GPUs as well as newer stuff like the GTX 860M. The result is that if you're not OCD about selecting your own game settings, GFE is a great way to get a nice balance of settings that will still give you a good frame rate. For the 860M, most of the time the settings are at high details or above, but a few demanding titles will tweak things.

Update: A reader requested I include 1080p results as well; I used the GeForce Experience "optimal" settings and they are listed in the above charts as "MSI GE60 1080p GFE". I've created a gallery of images showing the specific settings that GFE applies in each game on the GTX 860M below. Note that you can customize certain aspects of GFE as well (e.g. prefer higher performance or higher quality); I'm using the defaults here. The one exception is Metro Last Light, where GFE incorrectly thinks enabling PhysX is a good idea; as soon as the particles start to fly, PhysX causes the frame rates to plummet into the single digits! I know PhysX is an NVIDIA technology, but seriously: you cannot enable it on a GTX 860M with this game and still expect reasonable frame rates. Needless to say, I disabled the setting for the above results.

The short summary as far as gaming is concerned is that the GTX 860M offers plenty of performance in a reasonably priced package. It's not the fastest mobile GPU by any means, but really until we see larger mobile Maxwell GPUs I'd take the GTX 860M over the GTX 870M and GTX 880M. Those GPUs are faster, but they don't support the latest CUDA features – NVIDIA is up to Compute 5.0 now, which the Maxwell GPUs support whereas the Kepler mobile parts like 880M stop at Compute 3.0. Plus, the increase in price isn't enough to justify what's typically a moderate bump in performance in my book.