One area of performance that warrants a closer look with any gaming notebook is the question of temperatures and throttling. Simply slapping in a certain level of hardware inside a laptop isn't the same thing as truly ensuring that the hardware works as expected, and we've seen more than a few instances of notebooks that have severe throttling under sustained heavy loads. This is particularly true of the thinner class of laptops like the GS60, where cooling capacity often can't keep up with a sustained load.

While manufacturers might argue such loads are "unreasonable", it's still important that a system handle such loads gracefully. As an extreme example, dropping the CPU (or GPU) clocks to a minimum level while letting the GPU (or CPU) run at maximum clocks is generally not going to produce the best overall experience.

The ambient temperature for the stress testing is around 85F and represents a "worst case" scenario. The following graphs include temperatures and clocks using a 100% CPU + GPU stress test, a gaming workload, and a 100% CPU test. The data for the charts shows one hour of stress testing, though each test was run for at least two hours to verify that the system had reached equilibrium. 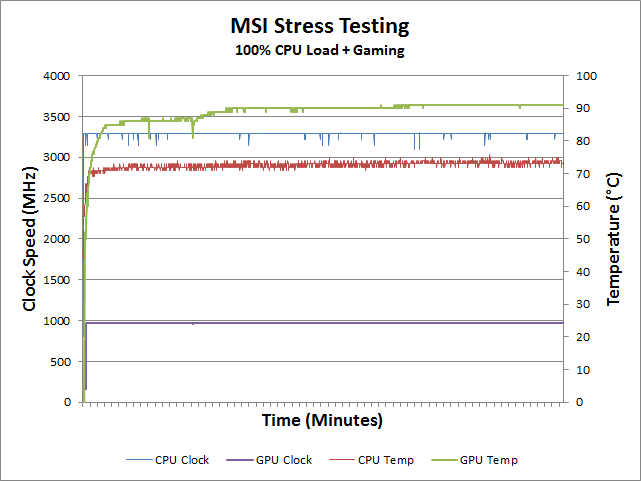 The good news is that the GS60 performed well during stress testing, and while it can get quite warm under heavy loads, that's pretty typical for when you push the CPU and/or GPU hard for a few hours – especially on thinner devices like this. Even in our worst-cast stress testing, the CPU continues merrily chugging along at 3.3GHz, which is the maximum Turbo Boost level for when all four processor cores are loaded. Meanwhile the GPU continues to run at Boost clocks of 967MHz (slightly above the rated 941MHz). Temperatures stabilize at around 90-92C for the GPU and 75C for the CPU. When compared with the bulkier MSI GE60, the thermal results are even more impressive. The GS60 is a thinner chassis and yet it still runs at higher clocks and lower temperatures compared to the GE60. Having two cooling fans certainly helps, of course. 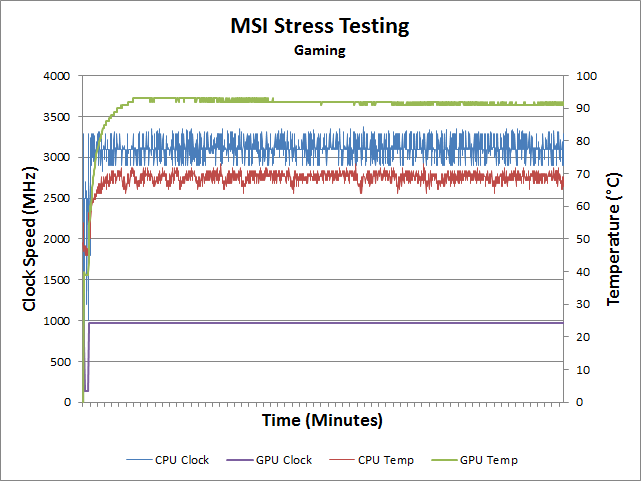 Gaming workloads aren't much different, as the system is basically hitting the same clock speeds as in the full stress test. The gaming workload has the GPU running at 967MHz once again, with the temperature hitting 90-92C. The average CPU clock across all four cores hovers between 2.9 and 3.4 GHz, though the maximum clock for an individual core is always at 3.3-3.4GHz. CPU temperatures are down slightly, sitting around 68-71C most of the time. 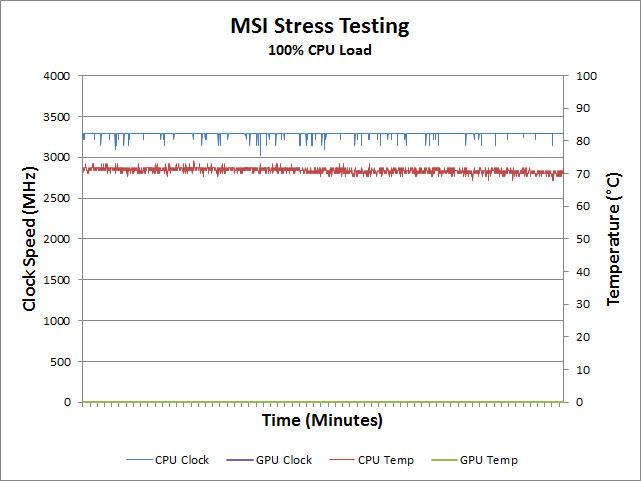 Last but not least, running a sustained 100% CPU load (e.g. video encoding or 3D rendering), the NVIDIA GPU is of course shut off so there's no GPU temperature or clock speeds to speak of. The CPU temperature is a bit higher than in the gaming test and a bit lower than in the full stress test, hovering around 69-71C with a few dips to 68C and the occasional bump to 72-73C. The CPU clocks once again are nearly static at 3.3GHz, with any fluctuations in average CPU clocks across all four cores being insignificant. 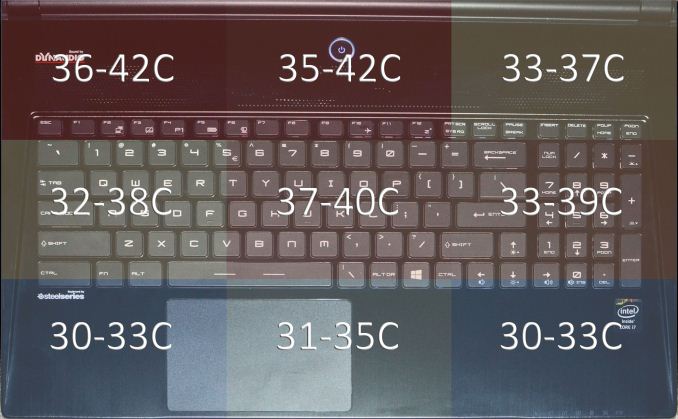 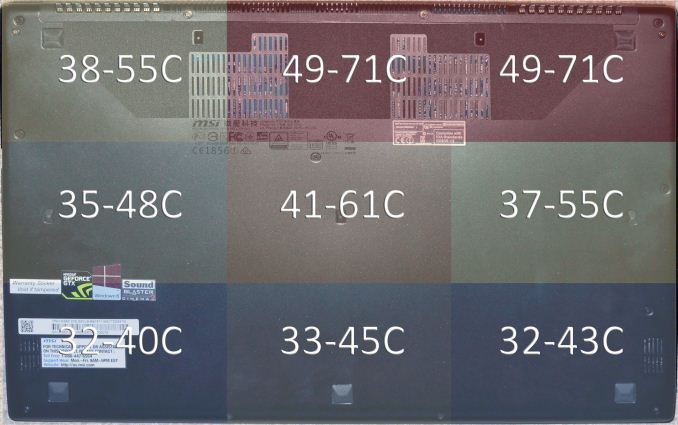 While the core temperatures are decent compared to some other notebooks I've tested, perhaps part of the reason is that the aluminum chassis is acting as a heat sink. Let me just say that the GS60 consistently feels much warmer to the touch than the GE60. The GPU appears to be located near the back-left quadrant of the chassis, and the left vent tends to be warmer (when gaming) than the right vent.

Starting with the top of the chassis, the palm rest is thankfully reasonably cool, measuring 30-35C during testing, but the keyboard can be a bit warm at 32-40C. The back is only a few degrees higher, measuring 33-42C, again with the middle and left being warmer than the right third. But it's the bottom where you really feel the temperatures, at least if you're resting the GS60 on your lap.

The front third (under the palm rest) is again the coolest area, measuring between 32C at the corners to 45C in the middle section closer to the center. The middle third (underneath the keyboard area) ranges from 37C on the edges to as high as 61C near the back/middle. The back portion actually has felt pads, presumably to prevent you from scorching your skin, and the temperatures on the left and middle thirds measure 49-71C! The hottest spot is right between the left and middle thirds, at the intake vent. The right third of the back portion is actually quite a bit cooler, measuring only 38-55C, though that can still feel a bit warm.

While the stress testing was done in a warmer environment, the surface temperatures were taken with an ambient temperature of 25C (75F), so there's certainly potential for the system to run even hotter. On the other hand, if you're not running a game and are just using the GS60 as a normal laptop, surface temperatures drop substantially. Running our heavy battery life test, for example, the hottest spot I could find on the surface of the laptop is only 32C, which is actually right around skin temperature. Considering most people are going to be gaming with the laptop on a table or a desk, the high surface temperatures on the bottom aren't all that critical in my opinion, but if you like playing games with your notebook sitting on your lap, you'll probably want to avoid high performance systems with a metal chassis on the bottom.