The MSI Z97 BIOS, as detailed in other Z97 reviews, is a nice step up from Z87. One of the major positives from our first MSI Z97 review, the MSI Z97 MPower Max, was that MSI had taken a large number of our comments about the BIOS from Z87 and Z77 reviews and actually placed most of them in. The Z97 Gaming 5 retails between the Z97 MPower Max and the Z97 Guard-Pro, so it was interesting to find those additions have carried down from the overclocking motherboard to the cheaper end of the spectrum. One of the additions is the easier application of XMP, which now has its own button on the front page of the BIOS: 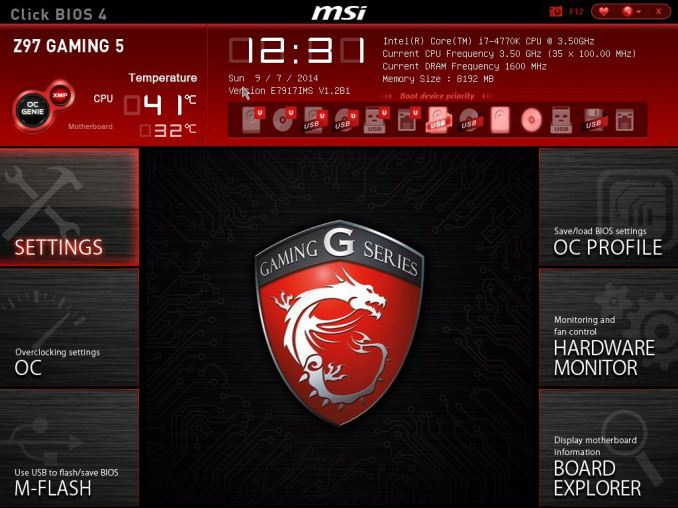 At the top left, along with the OC Genie, is an XMP button. In the past I had noted that enabling XMP on MSI motherboards, especially for users with no BIOS experience, was a minefield due to the (then) disorganized way of accessing memory settings. MSI’s solution is to move it out to this button on the top left, which simplifies things nicely.

The basic layout (as in previous generations) is a top bar featuring the Motherboard name, BIOS version, CPU installed, CPU frequency, DRAM frequency, DRAM size and CPU temperatures. The only real data missing here is voltages and fan speeds, which MSI has moved to a different part of the BIOS. To the left and the right are the main tabs which produce the list of options in the central screen. 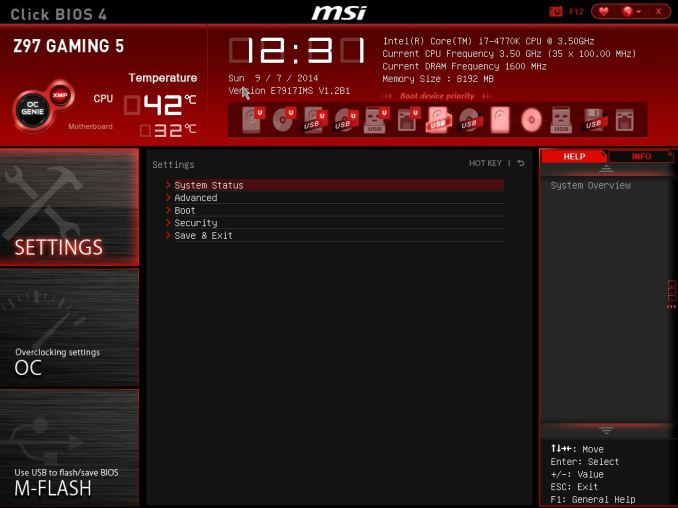 The screen above shows the settings menu with the option selected information to the right of the screen. On this right hand side, users have two options here, ‘Help’ or ‘Info’ – the help screen is shown in the other screenshots down below, but I wanted to draw attention to the info screen which gives the system voltages. I believe MSI has decided to put them here rather than on the top panel to save space but also because of the fact that voltages in the BIOS do not change until the system is restarted. I perhaps would still like the CPU voltage to be placed up the top with the other information, just for completeness and an instant reference. 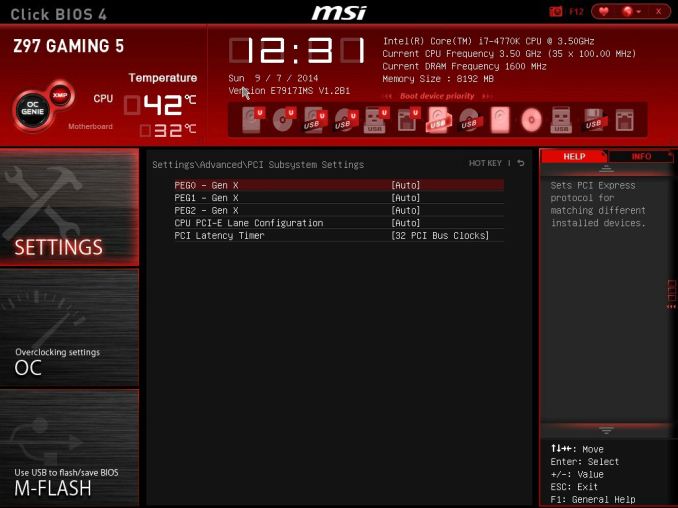 We praised MSI’s FM2 BIOS on the A88XM-E35 as MSI had decided to finally put the path of the options into each page, and here we see the ‘Settings -> Advanced -> PCI Subsystem Settings’ listed above, telling us where in the BIOS we are. I am still glad this is here, because due to MSI’s layout (compared to the other three major motherboard manufacturers) it is not always obvious exactly which menu we are in. Now we can be sure. 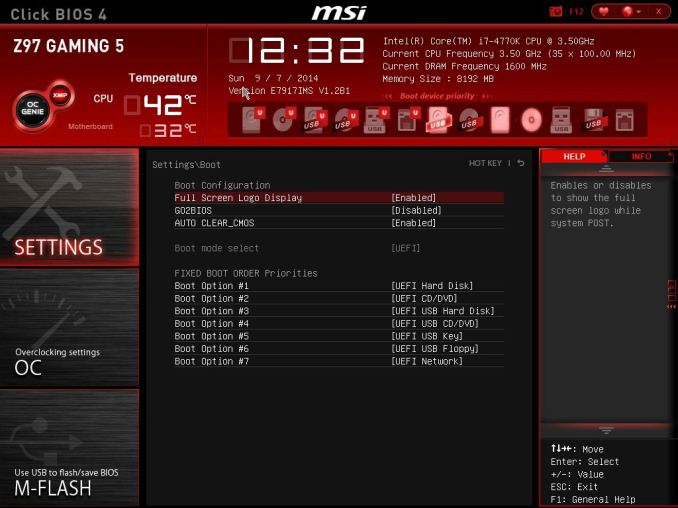 Now onto one of the things that I am most proud of MSI for: after several generations of bemoaning the overclock menu for being a hodge-podge of options with no discernable order, it finally has order! 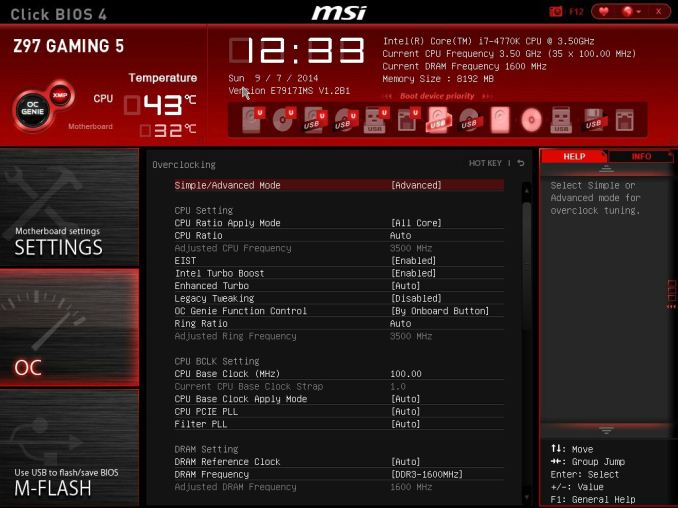 The layout starts with a selection between Simple and Advanced, which enables more options in the menu when Advanced is selected. This is followed by CPU settings, BCLK settings, DRAM settings, Voltage Settings and the ‘Other’ Settings. It could be construed that MSI could hide each of these options behind another menu for each (i.e. selecting ‘CPU Setting’ gives the CPU Setting options), but it all comes down to user preference. Some manufacturers have told me that users prefer long lists of options, whereas others prefer succinct menus.

One interesting feature that I did not expect from MSI is actually the top one in the OC menu. The Simple/Advanced option helps remove/add options that might add an extra element of confusion/expertise to overclocking. Switching over to the Simple option cuts out some of the more harder-to-understand options: 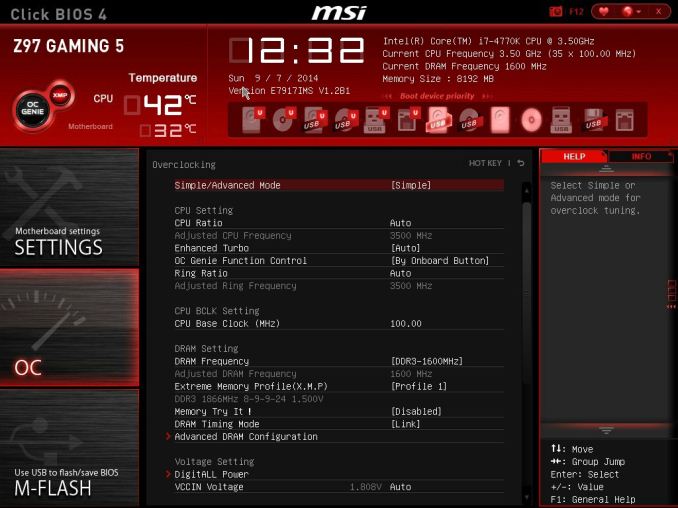 Here we are reduced down to the simple overclock options, such as CPU ratios, Base Clock and DRAM frequency.

With the help section on the right hand side, we get a set of words pertaining to the option selected. The next stage would be the help section to also include the min/max of the voltage range selected, as well as the granularity. 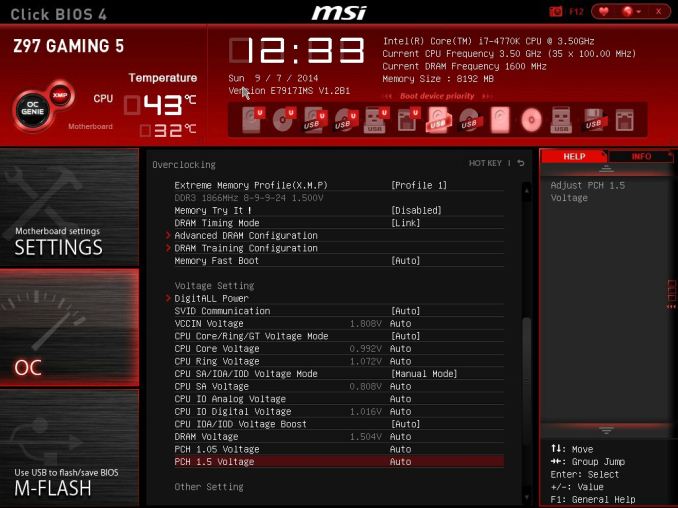 Highlighting a voltage option says almost nothing about the capabilities of the voltage, or how it might pertain to overclocking or stability. Users have to know the intricacies of each option on the fundamental level to understand what difference adjusting a voltage would make. This would perhaps be why extreme overclockers pour hours into studying specification sheets, or hours into trying settings.

Options such as DRAM timing and DRAM Training have not changed from previous generations. The last option is a shame because a lot of the DRAM Training options do not make sense unless you are a DRAM engineer: 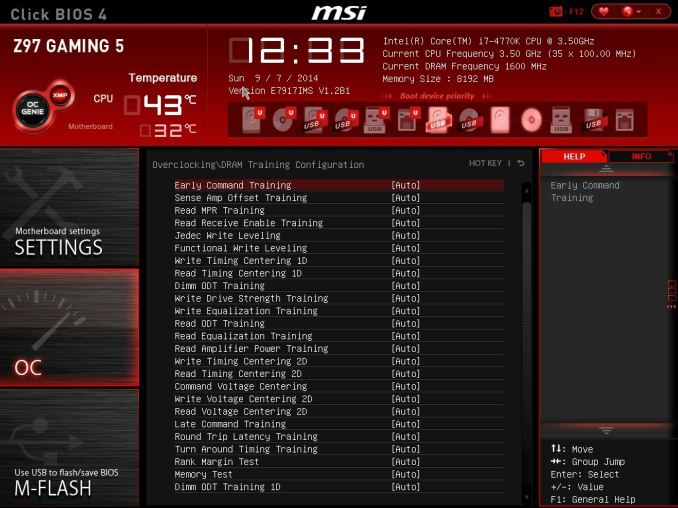 The next feature I want to get to grips with is the Hardware Monitor: 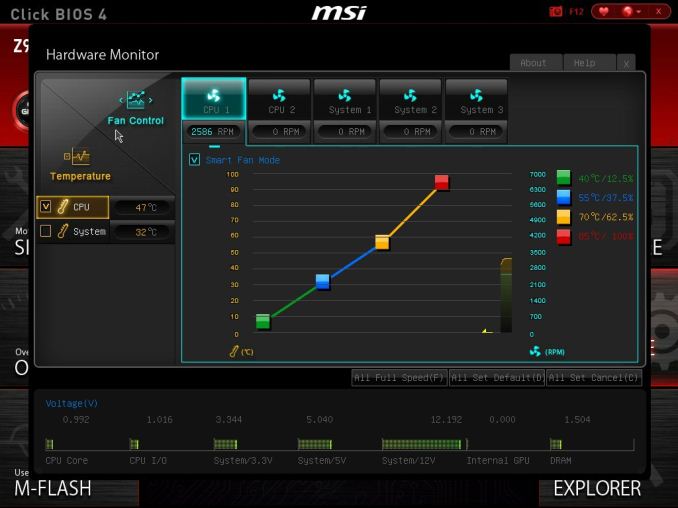 Back with Z87 MSI introduced their first version of the fan selection tool which showed a graph with two points of a gradient. Each of the gradient points was adjusted by sliders next to the graph but not on the graph. My main criticism of this, aside from only having two gradient points, was that the graph itself needs to be interactive. It was good having a graph, giving direct feedback to the user in real time, but the user needed to interact with the graph directly. The new Hardware Monitor is the result of suggestions like this. 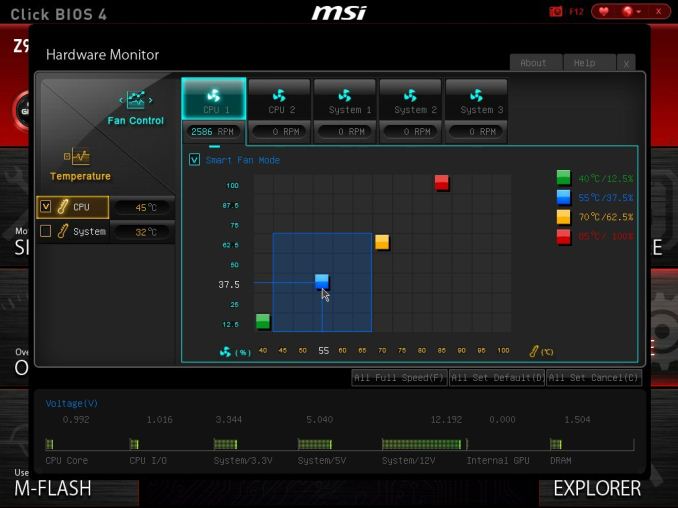 Aside from the increase to four gradient points, each of the points is selectable directly on the graph. The color coordination helps the user to read off the values on the right hand side, and also when selecting to move the points the BIOS shows the valid selections. One could argue about having a negative gradient on a fan (MSI does not seem to allow it), but I like the implementation and style of the fan gradient selection. This is a big step up for MSI in bringing readability and user experience to the BIOS from previous generations.

One issue worth noting is that fan power is not directly proportional to fan RPM. Most fans have a dead-zone <20% power where the fan speed does not change, and above 20% power, more power is more fan speed. ASUS (in BIOS and software), GIGABYTE (in software) and ASRock (in software) are now getting this issue and are implementing the testing routines to do so. Getting them to then adjust the graph to show RPM vs. temperature rather than power vs. temperature is a little harder (it requires some interpolation mathematics which is really easy to do), but this needs to be the next stage in MSI’s fan control development for the BIOS for sure.

MSI still retains the Board Explorer feature, this time it expands into showing which headers are populated. 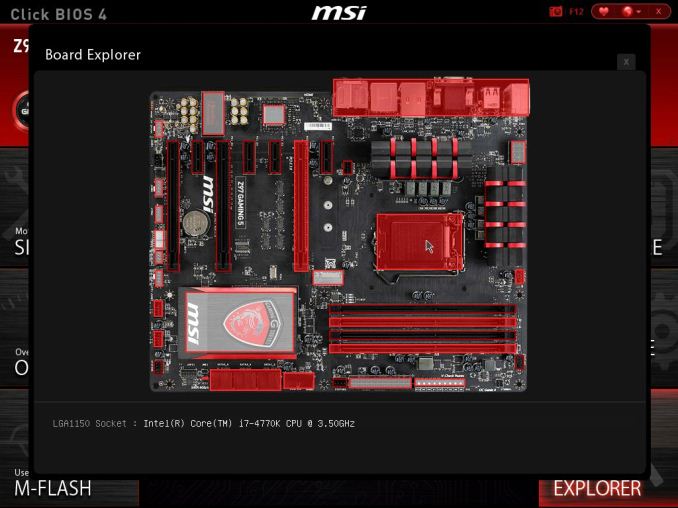 Another new feature to the BIOS is the Favorites menu. This echoes other manufacturers’ efforts in developing Favorites menus, however the MSI implementation was somewhat hidden from view, selectable only by clicking the heart symbol at the top of the BIOS. I would suggest that MSI move it to the Settings menu, which might make it used more.

The Settings Menu allows users to select which screen they want to start on when entering the BIOS: 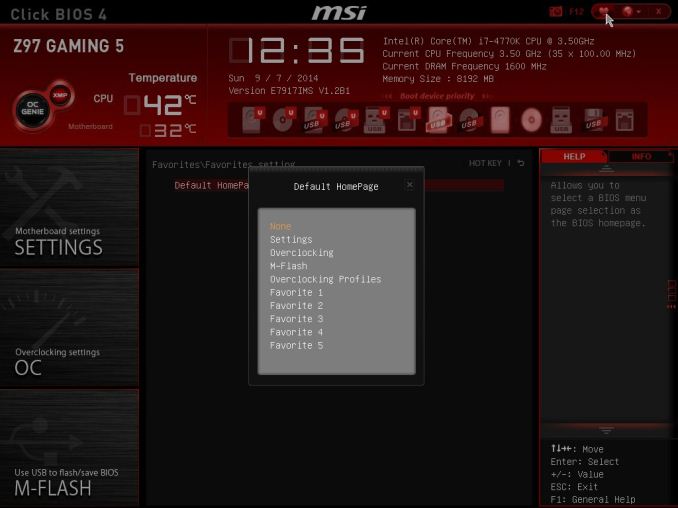 It might actually be worth MSI using their in house overclockers to create their own Favorite menus, and letting them be selectable from the selection of other menus. Although with the fact that MSI has now ordered the overclocking menu such that the options have some form of order, we might not see the Favorites menu being used that often because the BIOS is now easier to follow.