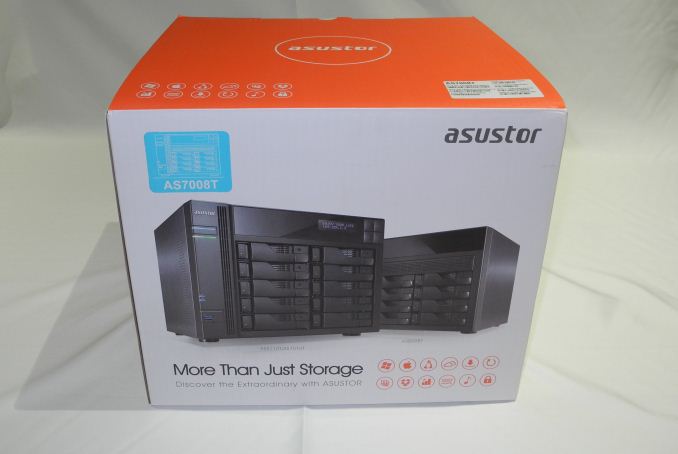 Asustor is one of the recent entrants in the NAS market. Over the last couple of years, they have tried to play in the same space as QNAP and Synology (with units based on the Atom D2700 as well as Evansport). However, they have recently opted to put more emphasis on the mid- to upper-range of the market with Haswell-based products in the 70-series. Rackmounts were introduced at CES, and the lineup was expanded at Computex. Asustor sent over the AS7008T, the 8-bay variant in a tower form factor, for review.

Unlike the 8-bay tower units from QNAP and Synology, the AS7008T opts for a horizontal drive strategy with two columns of drive bays. The main selling point of Asustor's 70-series is the presence of a high-performance Haswell Core-i3 processor (compared to the Atom-based models that QNAP and Synology are putting emphasis on for the SMB market). However, it has to be noted that the cost is correspondingly higher too. In terms of chassis I/O and hardware features, the AS7008T comes with a PCIe 3.0 x8 expansion slot and HDMI output. Other connections are pretty standard, with the usual bevy of USB 2.0 and 3.0 as well as eSATA ports. As usual for such systems, the 350W PSU is in-built. The PSU has a small fan in addition to the 2x 120mm fans in the rear responsible for cooling the drives and the motherboard components.

In the rest of the review, we will take a look at the Haswell / 8-series PCH and how the Asustor AS7008T takes advantage of it. This is followed by benchmark numbers for both single and multi-client scenarios across a number of different client platforms as well as access protocols. We have a separate section devoted to the performance of the NAS with encrypted shared folders. Prior to all that, we will take a look at our testbed setup and testing methodology.

The Asustor AS7008T can take up to 8 drives. Users can opt for either JBOD, RAID 0, RAID 1, RAID 5, RAID 6 or RAID 10 configurations. We expect typical usage to be with multiple volumes in a RAID-5 or RAID-6 disk group. However, to keep things consistent across different NAS units, we benchmarked a RAID-5 volume spanning all drives. Eight Western Digital WD4000FYYZ RE drives were used as the test disks. Our testbed configuration is outlined below.