Similarly to the BIOS, the software has been upgraded over the past 18 months. Easy Tune 6 is out, and the new interface is a sleek color-on-black design. This allows GIGABYTE to alter the color palette depending on what motherboard is being used – blue for Ultra Durable, orange for SOC and yellow/green for gaming. So despite the accents on our X99-Gaming G1 WIFI being red, the software has a default green-on-black style, but this can be adjusted in the preferences. 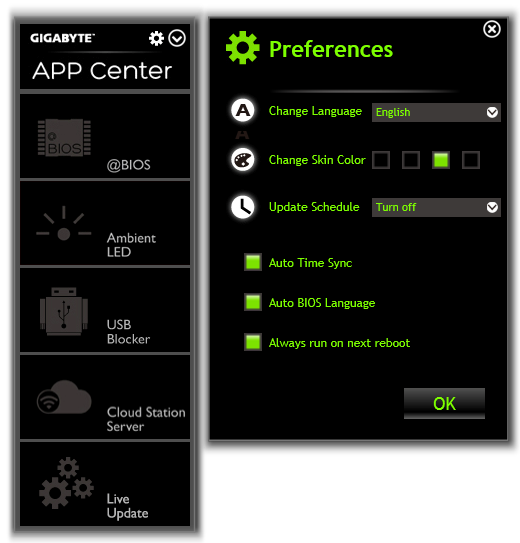 The base menu system is called APP Center which shows the various ‘apps’ in a scrollable window. The Live Update element on the bar is fixed, while the rest are sorted in alphabetical order. I primarily use EasyTune for overclocking or System Information Viewer for fan controls, and the apps can be moved around to any order. 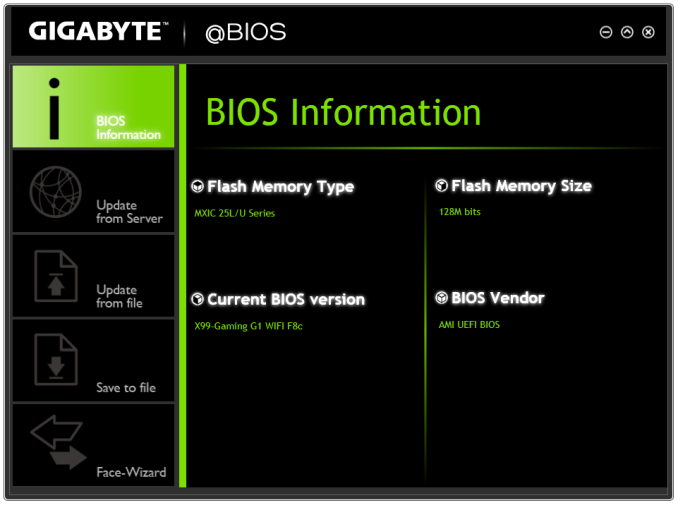 @BIOS is the interface for updating the BIOS through the operating system. This front screen shows the details of the motherboard (note the 128 Mb BIOS chip), and the tabs on the side allow the BIOS to be updated by directly downloading the BIOS from the server or via a file. The bottom selection, Face-Wizard, allows a user to adjust the POST image on startup. 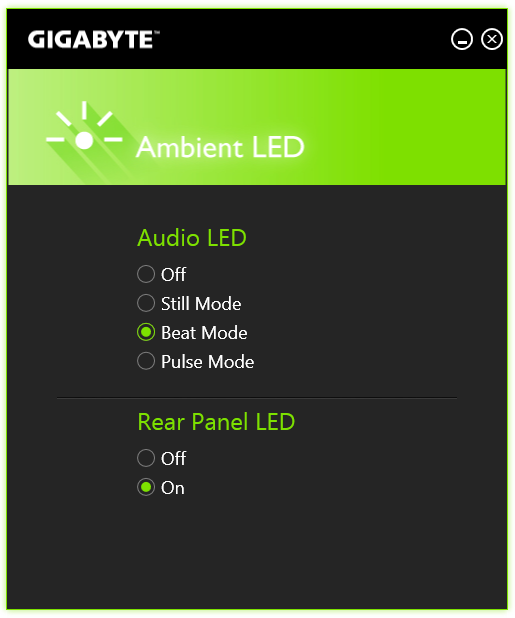 Ambient LED adjusts the lighting for the rear panel and the heatsink on the motherboard at the same time. In still mode, both lights are on constantly with pulse having the lights phase in and out. Beat mode keeps track of audio coming through the speaker ports on the rear panel and adjusts its intensity based on the music playing. I tried with various artists and the lights to adjust depending on slow and fast music, although during fast music it comes across as very flashy. 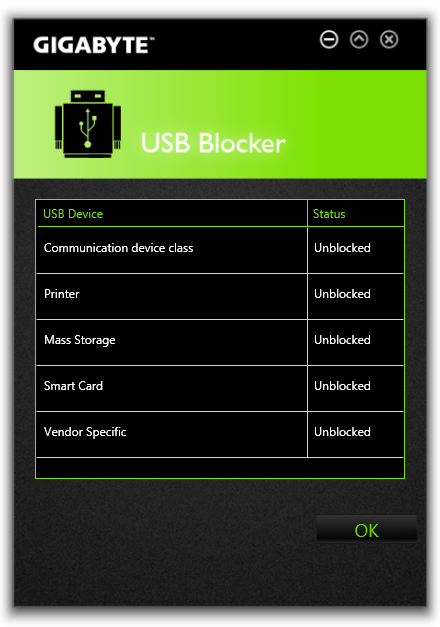 USB Blocker allows the administrator to block different types of devices used in the USB ports. GIGABYTE’s main use for this is in an office environment to stop employees using mass storage, or for public machines such as in libraries. 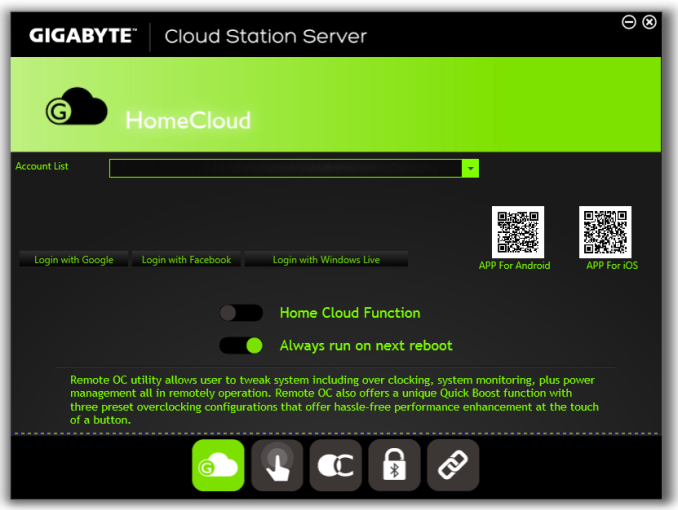 The Cloud Station Server is a relatively new part of GIGABYTE’s software package, allowing for overclocking, remote control, hotspot functionality and adjusting use based on proximity to a Bluetooth device (such that the system hibernates if >10m from a paired Bluetooth phone).

EasyTune is the big one for overclocking, and GIGABYTE offers several tools to help with automatic overclocks. We tested each of these and with a sufficient CPU 4.1 GHz should be a walk in the park. The Auto Tuning aspect also hit 4.1 GHz on our sample. 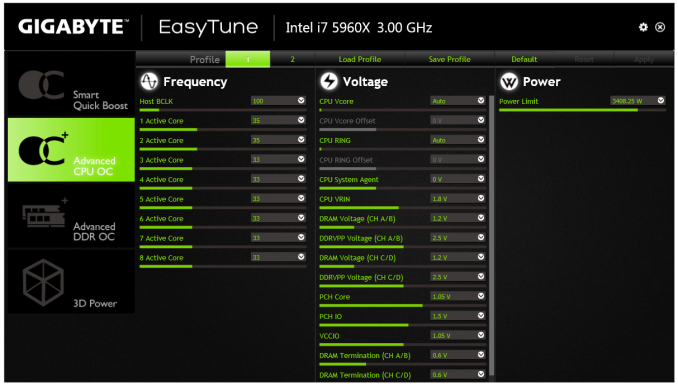 Manual overclocking can also be performed, and here GIGABYTE allows voltages by offset rather than the absolutes given in the BIOS. 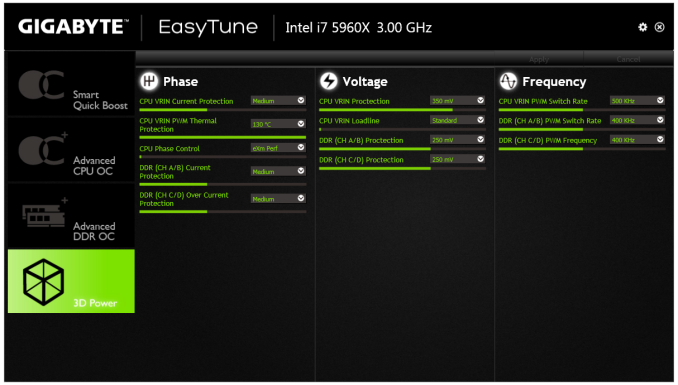 Users can also adjust the phase control and load line calibration in the 3D Power tab. 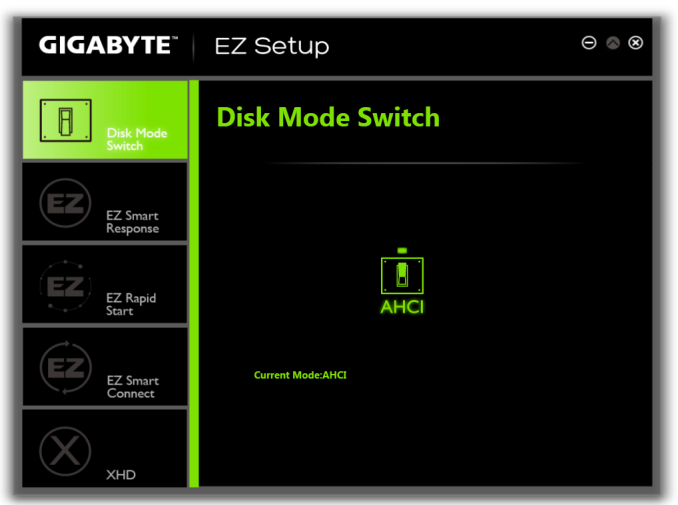 Ideally I would have liked this software to detect all the devices I have connected and list them, in case they were plugged into the wrong SATA ports for RAID as shown above. This software will also allow users to use an SSD as a cache for a large disk drive. 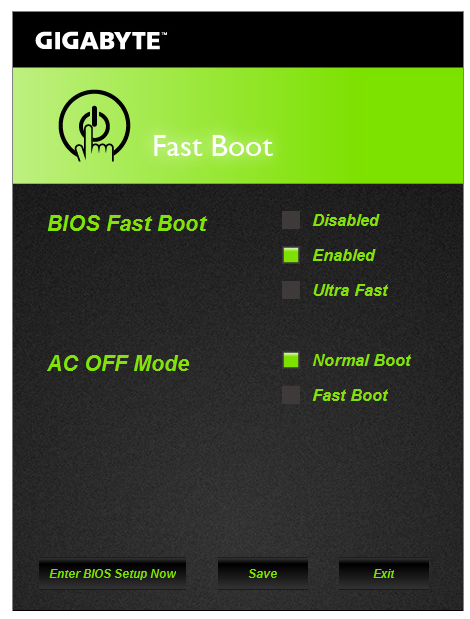 The Fast Boot application does what it says on the tin, with an extra option to allow users to restart and enter the BIOS directly. 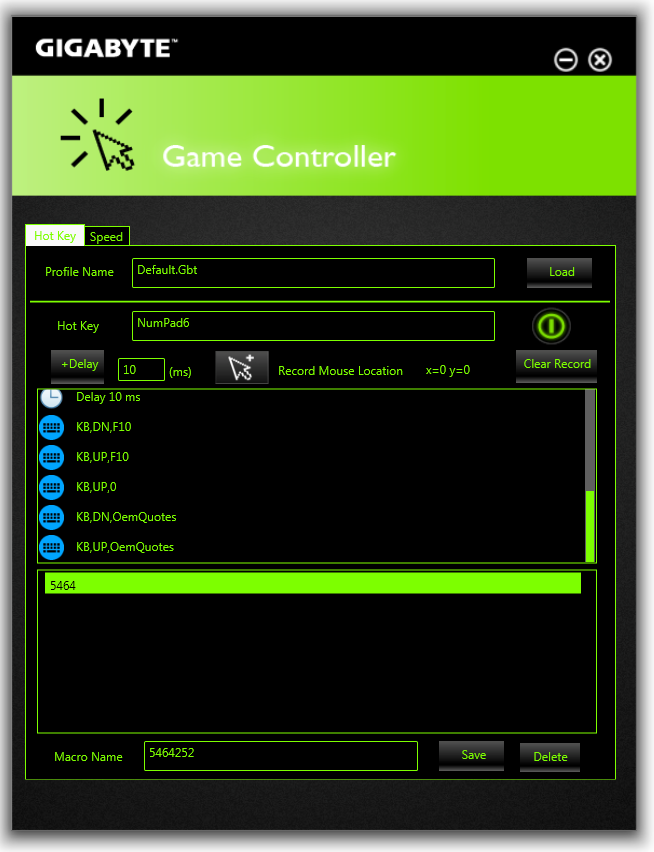 One of the newer tools in GIGABYTE’s arsenal is Game Controller, which allows both macro generation and introduces a ‘Sniper Mode’ for improved mouse accuracy. We have played with the macro generator before, and nothing much has changed – it needs some form of tutorial as well as the ability to adjust and move individual elements of the macro. Currently, if you make a mistake in making the macro, there is no way of adjusting a single element. 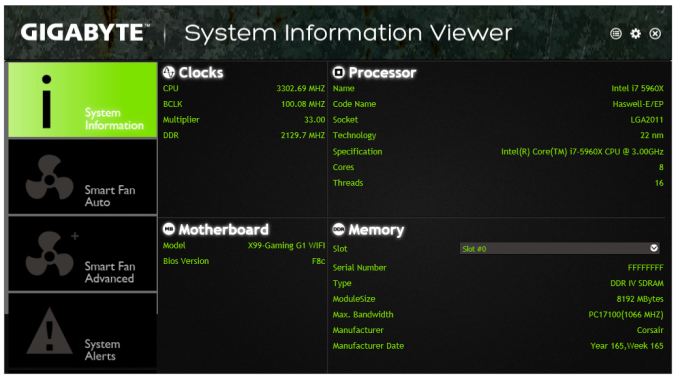 The System Information Viewer shows what the system has in it in terms of the processor, motherboard and memory, although the main use of this app is for the fan controls. 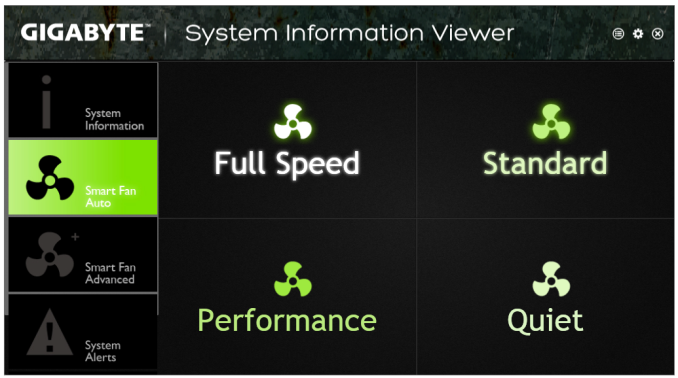 The software comes with four general fan settings which are applied to all the fans when selected. 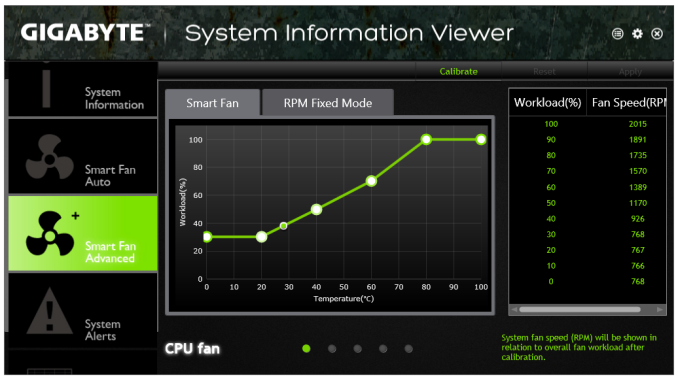 The advanced tab offers a calibration button that tests each fan in the system then the user can use that data to adjust the multi-point graph. That being said, I am unsure why the software does not to the mathematics for the user such that we get a graph of fan speed (RPM) against temperature – it would be really easy to do. GIGABYTE should also consider adding hysteresis to the fan configuration, as this allows the fan to remain at high mode when cooling down in order to speed up the process. 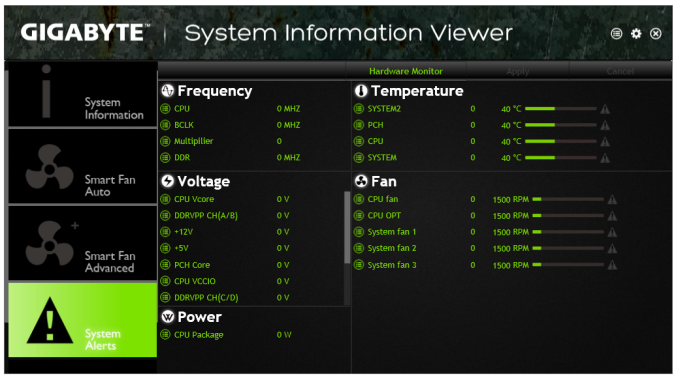 A user can also adjust the system to provide alerts when the temperatures or fans reach a maximum value. Other manufacturers provide similar alert systems, although typically users can select a high and a low value to produce a warning. The Hardware Monitor button here unfortunately did not work in our test system. 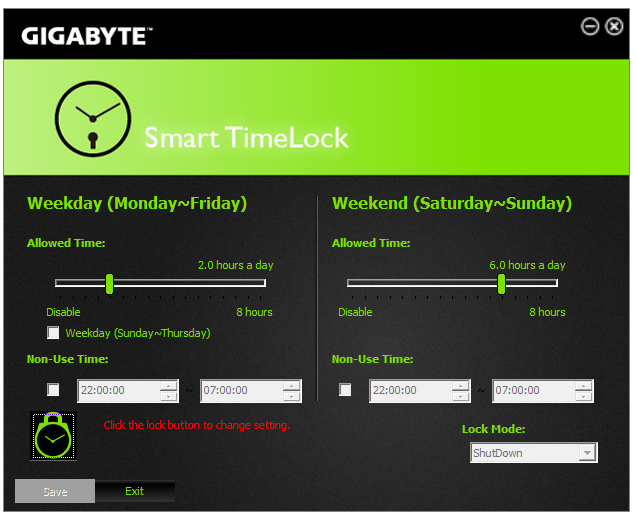 The Smart Time Lock feature is a super upgraded version of ASRock’s Online Management Guard but completely shuts down the system when the specified time limit is reached, or the system is in non-use time. This has applications for parents who want to limit the time their children use the computer for non-school activities. 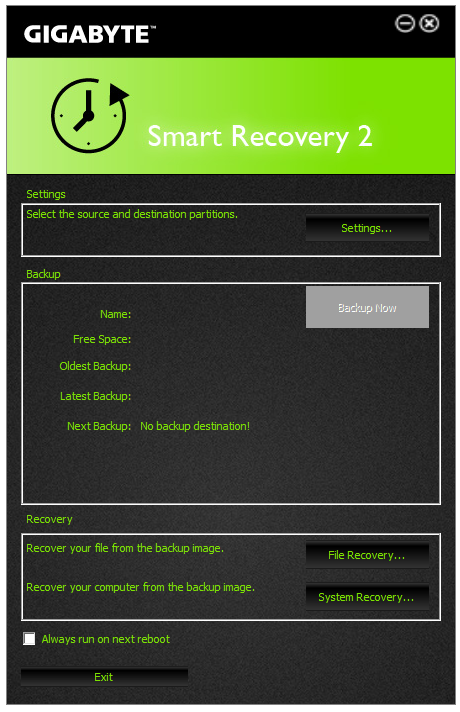 Smart Recovery will take an image of a drive for safe keeping and allow a user to restore he image should the system be compromised. Perhaps not ideal is that the user must install this software in order to restore the image – it would make sense if part of the software was baked into the image so it could self-extract and apply to the system it is run on. 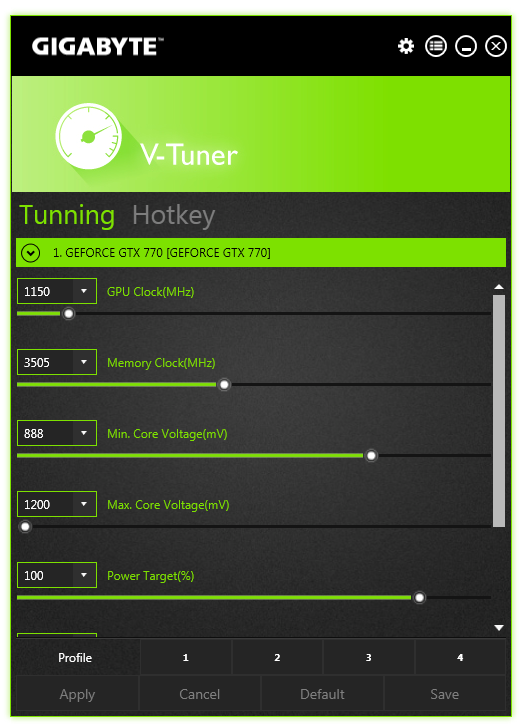 One feature we have not seen before is V-Tuner, which allows for GPU overclocking when applicable graphics cards are used. Here we had a non-GIGABYTE GTX 770 in play and it saw all the information as needed. 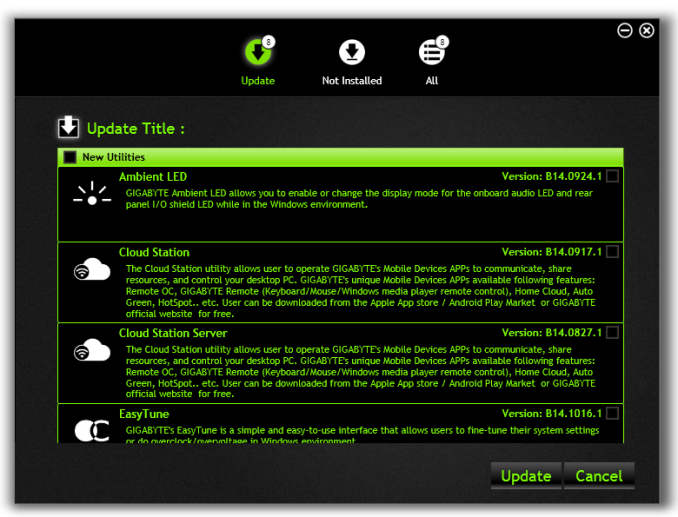 The last app for GIGABYTE is its update software. Compared to previous iterations we have tested, this successfully finds software that needs updating and performs the process of uninstalling and reinstalling as required. One issue that needs to be addressed here though is the size of each update needs to be made available to the user before it is selected to download. Otherwise those on slow or limited connections might be stranded with a 600MB update of audio drivers they might decide to postpone for another time.

Edit: We are being told that the latest version of the software does mention the size of the download. Awesome. 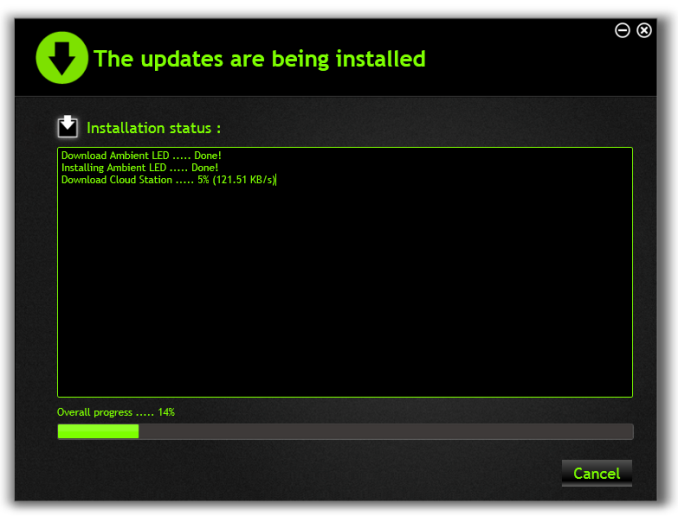