Alongside the USB 3.1 new models, MSI had several of their latest designs up for show which have gained traction both visibly in various forums and in terms of emails for my inbox. First up is the Z97 SLI Krait Edition, marking a departure from MSI’s traditional range of colors to a purely black and white model. This is cashing in on the philosophy of providing clean solutions, and to that extent MSI also has a black and white GT 970 GPU to go with the design and the aim to be paired together, perhaps with some white DRAM as well. 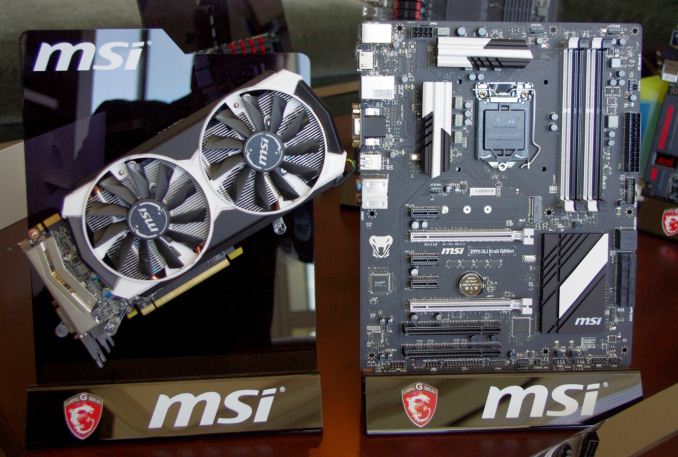 The motherboard is low down the product stack, indicated by the lack of three-way GPU support, fewer SATA controllers and the minimum/clean design on the PCB. The Krait branding will come with the snake logo, different to the dragon used in the gaming series. 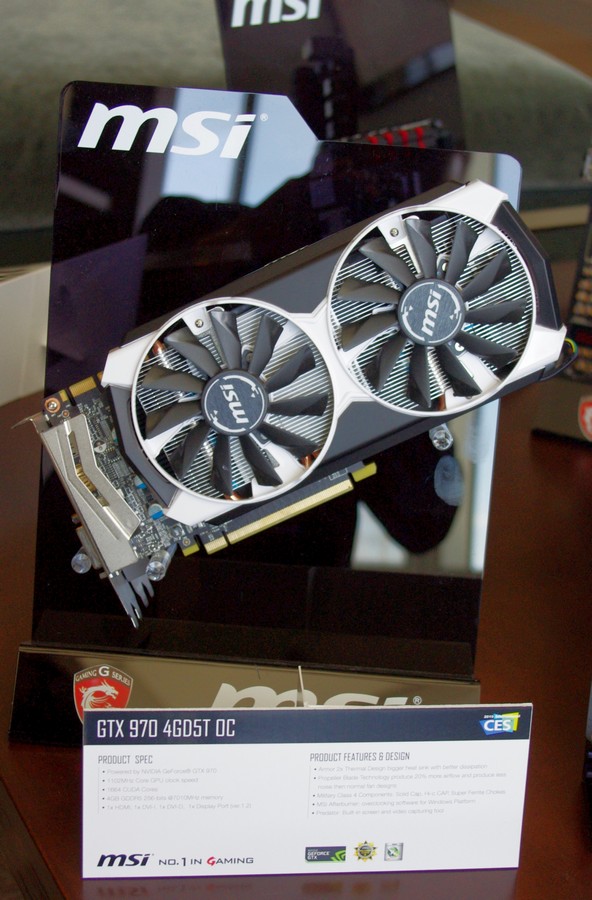 The GTX 970 4GD5T OC uses MSI’s Twin Frozr design platform but in a white livery and a small overclock. XoticPC and MSI paired up to create the Elysium system based on both the motherboard and the GPU along with an InWin S-Wave chassis: 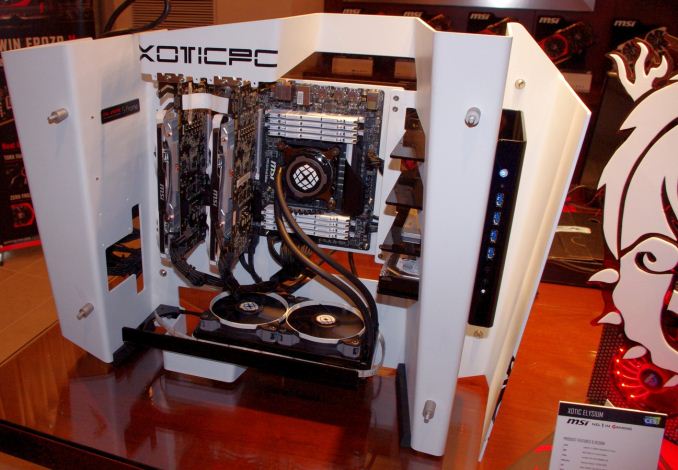 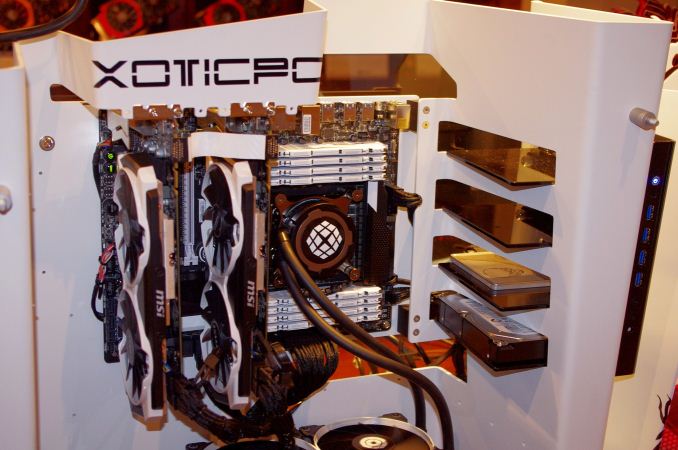 Also in the motherboard arena was the Z97I Gaming ACK, which probably should not be shortened to the Z97I GACK, but the interesting element here is the WiFi solution. 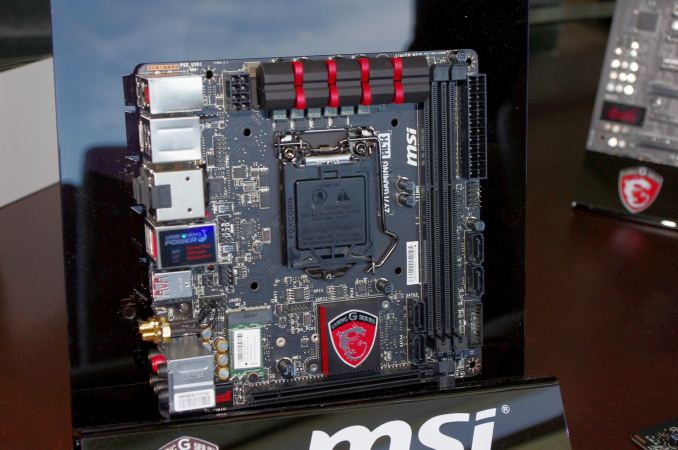 The board uses both Killer branded Ethernet and an 802.11ac M.2 x1 module either for teaming or for directional prioritized data transfer, which can be useful depending on your scenario, particularly while streaming at a LAN event. We also spent some time with Qualcomm at the event, who own the Killer brand, and got some interesting information on that front which we need to follow up upon. 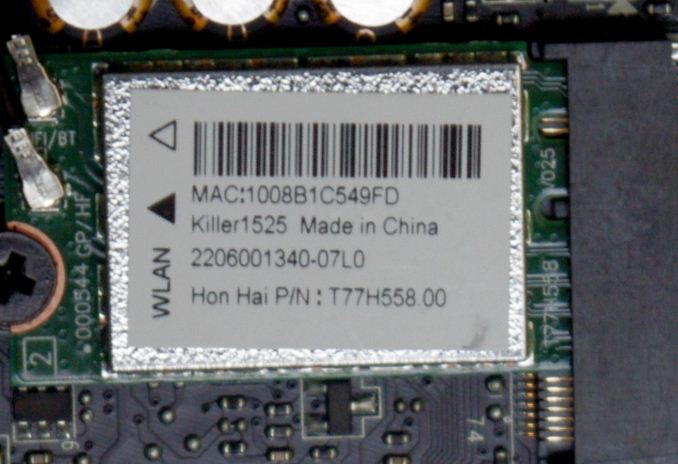 The WiFi module being used comes out as the Killer 1525, made by Hon Hai. Interesting indeed.

On the GPU front, MSI was showcasing two major parts. First up is the GTX 970 Golden Edition to mark their 100 million graphics cards sold milestone: 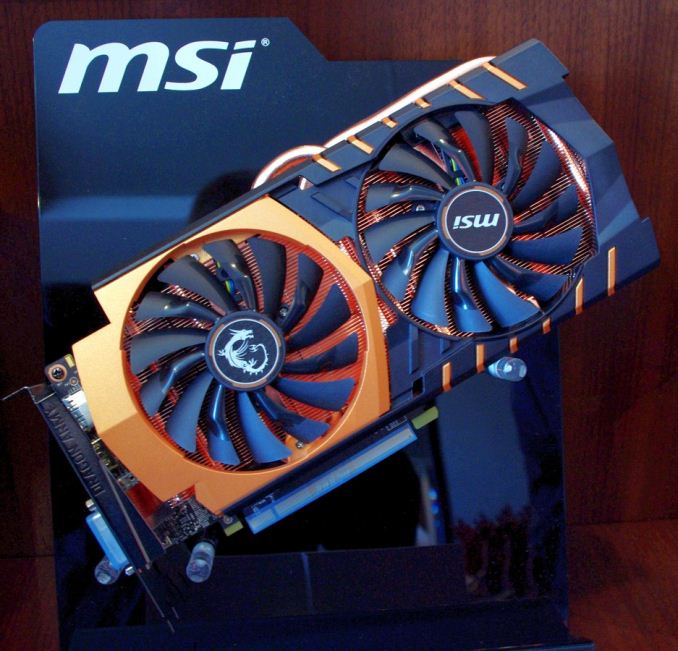 Featuring MSI’s new type of fan, the GTX 970 Golden Edition uses a full copper heatsink for the base plate, heatpipes and all the fins. Normally a graphics card would use copper heatpipes and perhaps a copper base plate on high end models, but the fins are almost always aluminium. This implements a full copper solution, similar to the ThermalRight Ultra 120 Extreme Copper Edition I use in motherboard reviews, and like that CPU heatsink comes in very heavy. MSI did not have scales to hand, but we are talking over 1.2 kilos per card, which might cause stress on the GPU slot and is best suited when edge support is in place or when the motherboard is parallel to the ground. Nevertheless the GPU is slightly overclocked and the cooler should offer a bit more in terms of overclock potential, depending on if MSI bin the silicon.  Also to note that this is also a GTX 970, and not the 980, which I hope MSI would look in to. 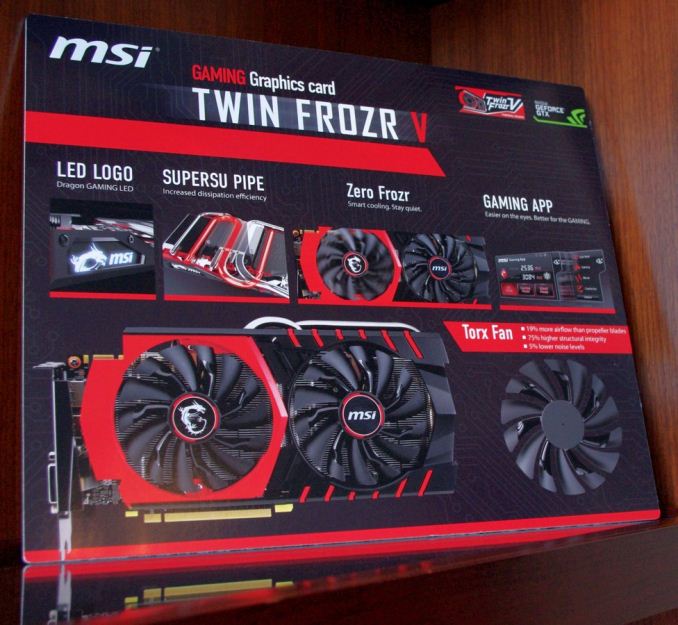 Another newer element is MSI’s Torx fan which adjusts the attack angle of alternate fan blades from the center to the middle in order to force more air into the area around the center of the fan. MSI is claiming 19% better airflow, 75% better structural integrity and 5% lower noise, but no numbers were provided for those comparisons. 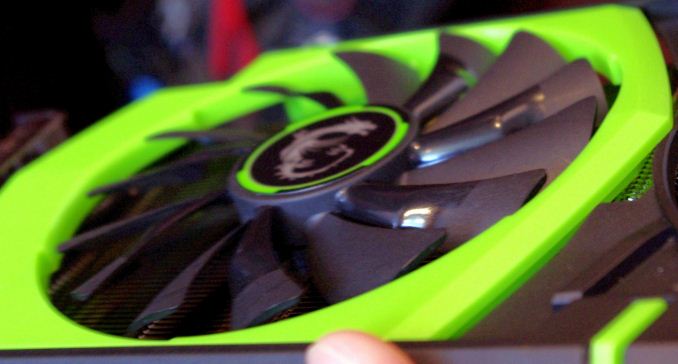 It would be an interesting exercise to see visualizations of the CFD that went into this design. Sometimes it is tricky to tell for yourself whether design A or design B is better without the calculations in front of you, and the results would point to the accurate conclusions. Nevertheless the fan design is making its way onto all Twin Frozr V cards, including the 970 Golden Edition. Alongside MSI showing off the Krait range with a custom PC, they also showed a custom mod around the Dragon gaming logo and a pair of Twin Frozr V cards: 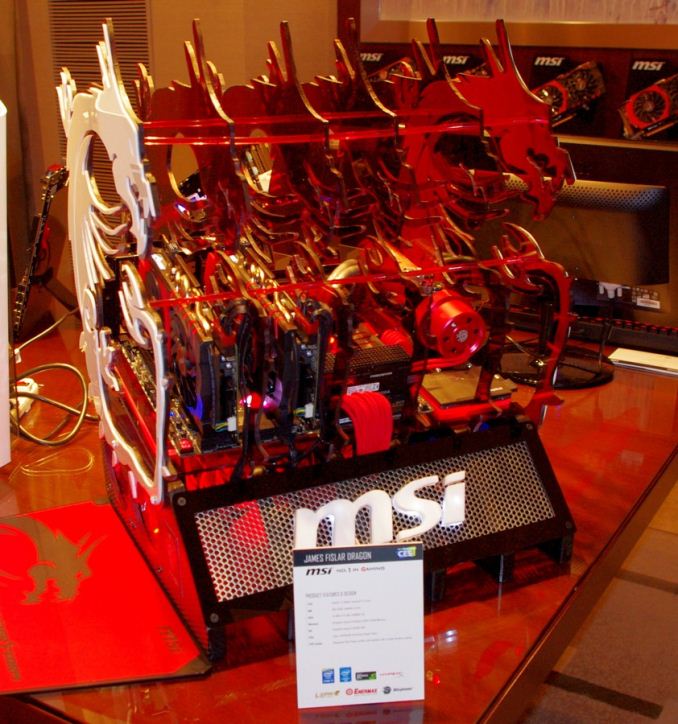 That picture is correct, in the sense that MSI is laying it on thick with the red aspect, with this James Fislar Dragon design using red cabling as well as a red pump and red coolant going through the water cooling system. 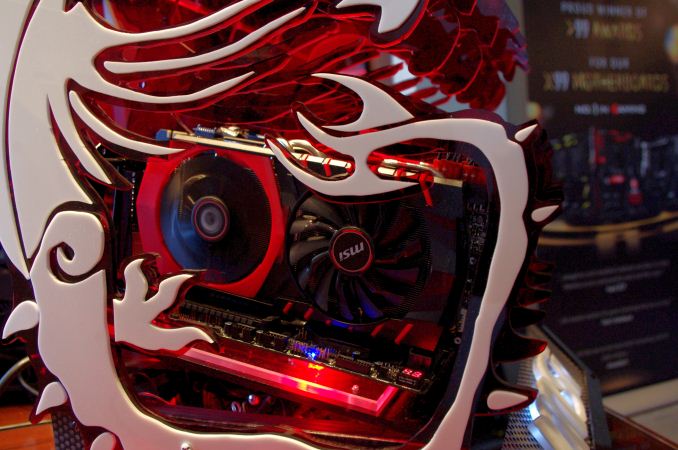 The system also showed one of the features of the GPU design, with one fan being able to turn off completely when in idle modes. This fan typically cools the power delivery, which is losing a lot less absolute energy as heat when in idle.

MSI were also showcasing off their new aluminium based Thunderstorm Mouse Pad and a gaming headset for good measure: 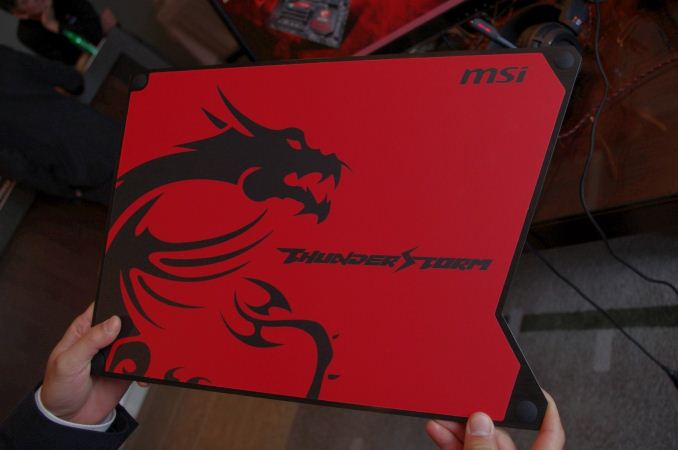 As the motherboard reviewer at AnandTech since 2011, we have seen MSI go through a significant shift in direction. Back then MSI was competing heavily on price, and neglected the user experience compared to its ultimate potential. Today in 2015, as CES is showing, we are in the decade of user experience, and MSI know this to be true on the design front. The Gaming range for MSI is now their primary focus, according to Eric Kuo, the MSI Vice President for Worldwide Sales and Marketing. From our perspective, MSI is only starting to look at the technical side of the equation again after spending a couple of years focusing on the look. But what is currently out in the market from MSI is some of the cleanest and aesthetically pleasing but also adventurous design. Sure, a dragon on every piece of hardware is not for everyone, but at least MSI is aiming to provide that consistent design philosophy across motherboards, GPUs, peripherals, and as we reported on earlier, their gaming line of notebooks.

As part of our trip to CES 2015, we also had an opportunity to sit down with two MSI VPs from their HQ sales and marketing departments for a quick interview. Stay tuned for that piece.