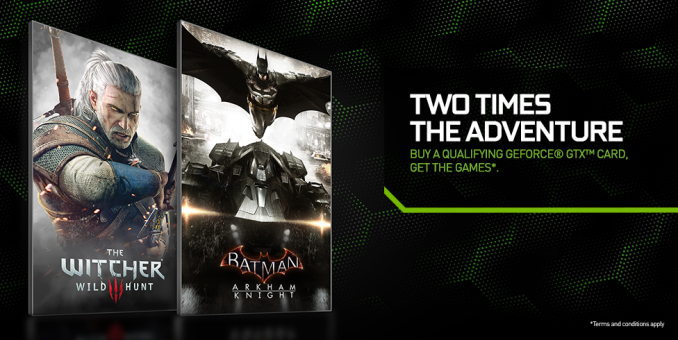 Back in March NVIDIA launched their Witcher 3 game bundle promotion, which saw game codes for the forthcoming ARPG packed with a number of GeForce GTX 900 series cards. With that promotion set to expire later this month, today NVIDIA is announcing that they have renewed and updated their game bundle promotion.

Launching today is the Two Times The Adventure bundle, which sees the Witcher 3 joined by the forthcoming Batman: Arkham Knight on the GeForce GTX 980 and GTX 970. Batman: Arkham Knight is the 3rd Batman game created by series developer Rocksteady, and the 4th game in the series overall. The latest entry in the series is still Unreal Engine 3 powered, but this marks the first time the game has been targeted solely at PCs and what are now the current-generation consoles. Meanwhile as a traditional showcase for NVIDIA’s GameWorks technologies, Arkham Knight will once again be tapping NVIDIA’s PhysX libraries for cloth, turbulence, and destruction.

This latest update will see just the GTX 980 and GTX 970 receiving both Arkham Knight and the Witcher 3, while the GTX 960 and higher-end GTX 900M parts will continue to receive just the Witcher 3, indicating that NVIDIA is especially keen to improve the value proposition on their higher-end desktop cards. Meanwhile notably absent entirely is the GeForce GTX Titan X, which launched back in March. NVIDIA bundles that include GTX Titans are hit-and-miss, and with little competitive pressure for their Titan cards more often than not NVIDIA excludes them from bundles, as is the case here.

Finally, as always, these bundles are being distributed in voucher from, with retailers and etailers providing vouchers with qualifying purchases. So buyers will want to double check whether their purchase includes a voucher for either of the above deals. Checking NVIDIA’s terms and conditions, the program is valid in all regions except China, and the codes from this bundle are good through July 31st, so it looks like this will bundle will run for just short of 2 months. The Witcher 3 will be distributed DRM-free through GOG, meanwhile Arkham Knight will be distributed through Steam.