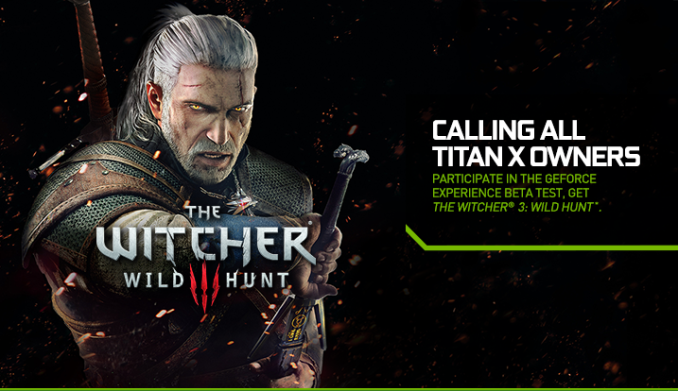 When NVIDIA announced their most recent GeForce game bundle, notably absent was the GTX Titan X. With Titan products typically uncontested in holding the performance crown and priced as a luxury product, NVIDIA rarely has a need to offer game bundles with the flagship cards. For that reason, the latest revelation from NVIDIA has come as a bit of a surprise.

Effective immediately, NVIDIA is going to be bundling The Witcher 3 with the GTX Titan X in a roundabout manner. Furthermore this offer applies to both new and existing GTX Titan X owners, so those buyers who have picked up GTX Titan X cards in the last two months are eligible for a post-purchase freebie, making this one of the only other cases of a retroactive bundle.

So how does all of this work? Officially NVIDIA is offering copies of the game not with the purchase of a GTX Titan X, but rather as an incentive for participating in a software beta test. The software being beta tested? A new feature to redeem game codes through GeForce Experience, with The Witcher 3 being the first product to use the system. 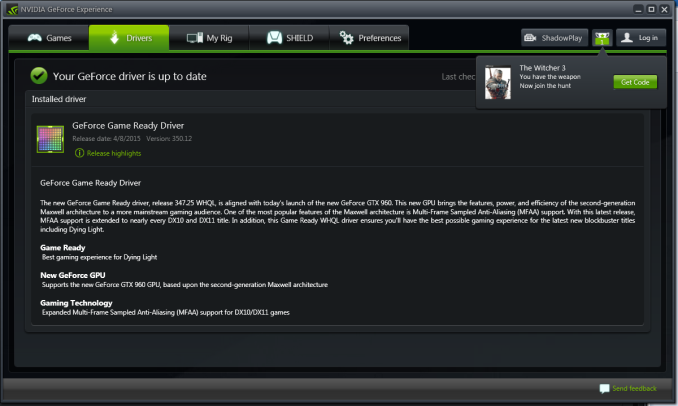 In any case, since the beta is open up to all GTX Titan X owners, this ends up being a de facto retroactive game bundle for the card, as the promotion covers all current cards and runs for the next month, through June 19th. As for NVIDIA’s motivations, while I don’t doubt that this is in part a serious effort to beta test the new redemption system, at the same time it’s a back-door method of launching a game bundle for their $1000 flagship card without making their existing customers irate. With AMD making their own waves today, it’s certainly an interesting coincidence.

Anyhow, GTX Titan X can find the full program details over at NVIDIA’s website. The promotion page includes detailed instructions on how to collect the Witcher 3 code through the system, and activate it through GoG and NVIDIA’s redemption system.

Finally, the fact that NVIDIA is testing a new redemption system signals an interesting shift in how future game bundles may work. While NVIDIA has not commented on this bundle so far – in fact they haven’t even announced it on GeForce.com yet – I suspect what we’re looking at is a beta test for how NVIDIA intends to distribute all bundles in the future. A distribution system through GeForce Experience not only increases the user base for that software, but more importantly it smooths over some of the logistics of bundling games. Retailers would no longer need to distribute vouchers, and based on NVIDIA’s description of how the bundling system works, it looks like this could shut down the grey market for reselling bundle redemption codes as well.