At the launch event for their new Nexus phones and the Pixel C, Google made a point of advertising the Pixel C’s display as a 2560x1800 panel with a 500nit brightness, a 1.422 aspect ratio, and a low-temperature polycrystalline silicon (LTPS) backplane. The use of LTPS doesn’t have a direct impact on the user as far as display accuracy is concerned, but it can help to lower power usage and increase brightness by reducing the size of light-blocking circuitry. This can also lead to longer battery life by reducing display power, as the backlights don’t need to be pushed to as high of a brightness. 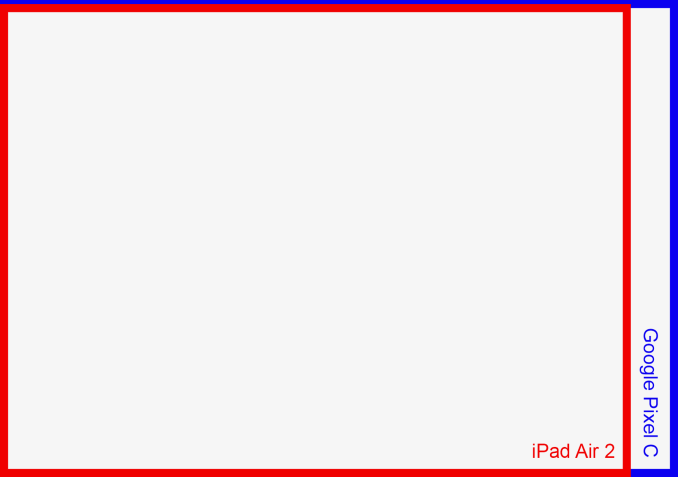 The Pixel C’s aspect ratio is a very interesting choice. While one can consider the 4:3 aspect ratio of the iPad to be fairly close to a digitized sheet of 11 x 8.5” paper, the fact that most of the world uses A series paper which has a square root of two 2 aspect ratio makes the Pixel C especially well-suited for displaying those documents. It’s a wider aspect ratio than what you get with a 4:3 display, but not as wide as the one on a 16:10 Android tablet, and slightly less wide than Microsoft’s Surface Tablets which have a 3:2 aspect ratio. However, the Pixel C is still wide enough that you’re clearly intended to use it in a landscape orientation. Landscape doesn’t lend itself well to the majority of Android apps that just throw up a big phone UI and call it a day, and I feel that it may have been a mistake on Google’s part. A future update to enable split-screen multitasking may change things here, but for now you’re stuck with an interface and applications that just don’t feel at home on a display of these proportions.

Something that I felt worth noting about the Pixel C was how reflective the glass appears to be. While we don’t have a test for the exact reflectivity of a display, it’s something that can be fairly well gauged just by using the device and making comparative observations to other devices. All of the Android tablets I review are clearly more reflective than the latest iPads due to the lack of anti-reflective coatings, but the Pixel C really stands out for its high reflectance. I’ve had a number of issues using the Pixel C due to reflections making it impossible to see what’s on the screen, which means that I have to increase the brightness to compensate. This subsequently reduces the battery life because it increases the power consumed by the display. While Google is able to overcome these issues due to their high brightness, utilizing an anti-reflective coating to allow for visibility even with a low brightness allows for better real-world battery life. 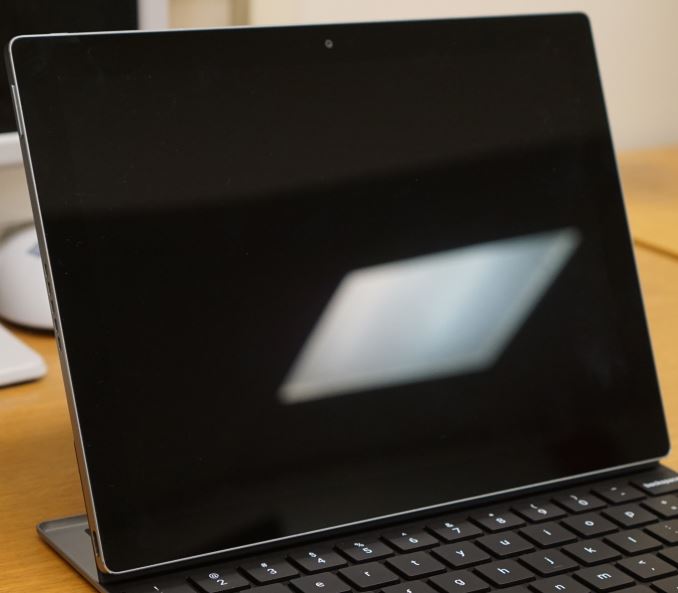 In addition to fairly basic specifications like brightness, resolution, and aspect ratio, a display has many other aspects relating to color accuracy. On mobile platforms, a display must target the sRGB color standard to accurately render the content that one will find on the web, and through all video streaming and photo sharing services. To evaluate a display’s accuracy relative to the sRGB standard we run it through our custom display workflow, using an X-Rite i1Pro 2 spectrophotometer and i1Display Pro colorimeter along with SpectraCal’s CalMAN 5 software for collecting and managing the data. 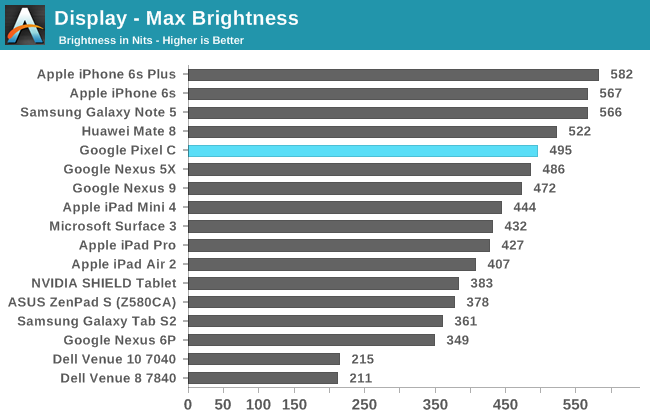 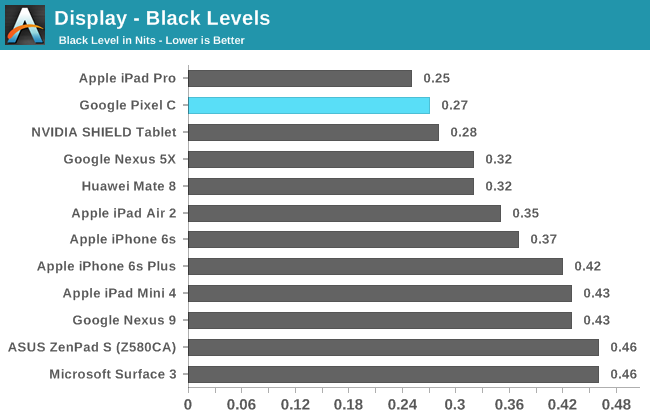 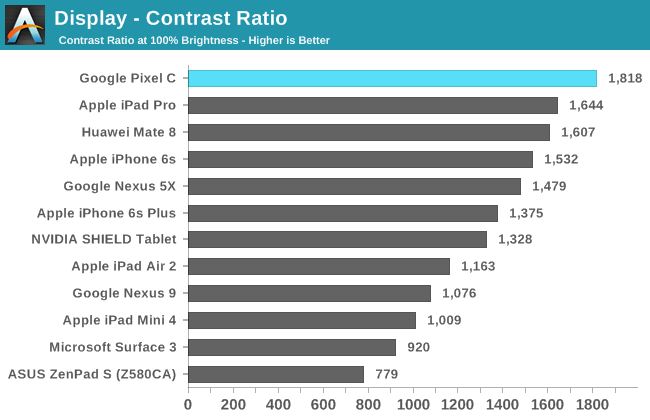 The Pixel C’s display goes up to 495 nits measured at the center of the display, and so Google was quite accurate in their advertisement of 500nits. This is the brightest tablet on record, beating the Nexus 9 by around 25 nits. As I mentioned earlier, the highly reflective glass makes the high brightness levels quite necessary, which will likely end up impacting the real-world battery life that Pixel C owners see. It’s also worth noting that the touch sensor layer is highly visible when light shines on the display, which makes it even more difficult to use outdoors or with overhead lighting. This is something that I’ve only seen managed well on Samsung and Apple devices, and for a flagship Android tablet with a completely custom display I expect better in this regard than what the Pixel C delivers. 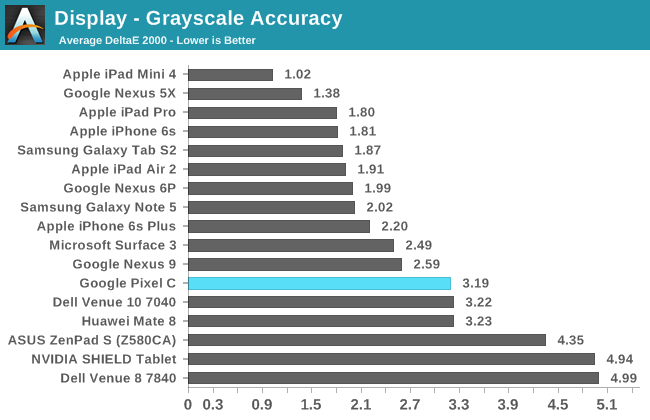 Greyscale accuracy on the Pixel C is fairly good, with a DeltaE error value slightly over the motion-visible value of 3. The error is mostly due to the green component of luminance dropping as you move from black to white. While we certainly have been spoiled by the rapid increase in mobile display quality over the last few years, I do think that Google could have pushed color accuracy higher here. That isn’t to say that I think the Pixel C will disappoint, but considering that it’s an entirely custom panel on a premium device that won’t be shipping in high volume, I think Google could have gone a bit further. Competition is getting fairly fierce in this category, with devices pushing for DeltaE values below 2, and some units achieving values below 1 which would make the error impossible for the eye to detect in any circumstance. In the end, the Pixel C’s greyscale accuracy is quite good, but it’s not the absolute best that I’ve seen. 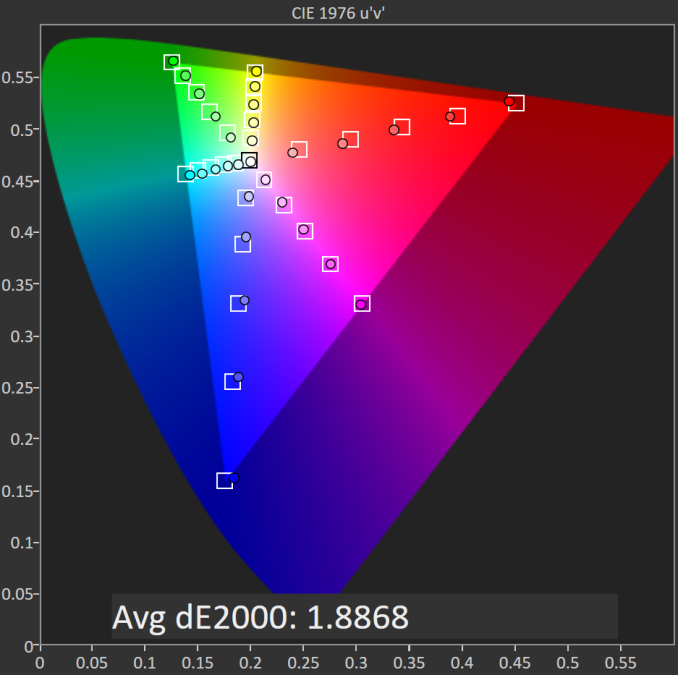 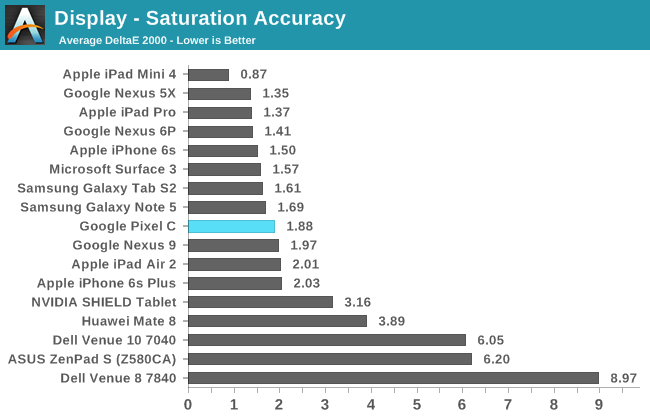 The Pixel C’s accuracy with rendering primary and secondary color saturations is excellent. With an average DeltaE value below 2, I doubt any person will find themselves bothered by what little inaccuracy there is. The only color that actually exhibits an error above 3 is 100% red, with the remaining values all sitting below. 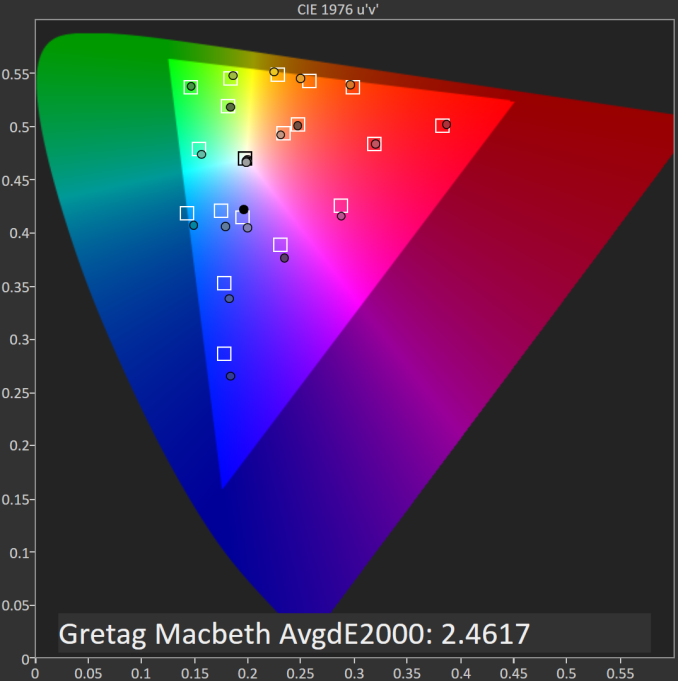 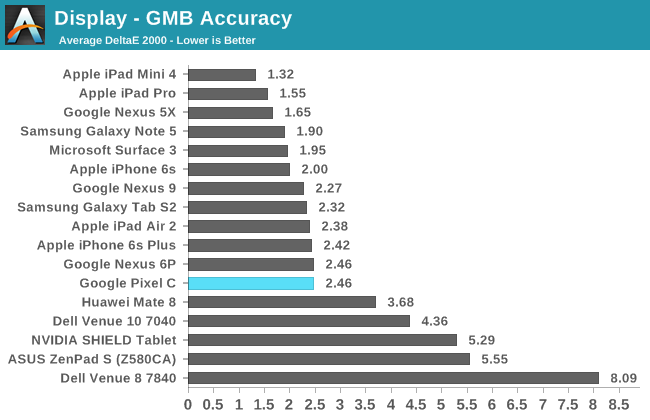 The Pixel C does quite well in the Gretag-MacBeth ColorChecker test. The average error is below 3, with the only outliers being color mixtures that primarily have a blue component, along with the greyscale values that are included in the test. Most other colors have DeltaE values somewhere between 1 and 2, and with that kind of accuracy I don’t really have any complaints, even if it’s not the absolute best result that I’ve ever seen.

In the end, the Pixel C comes with a bright, accurate, and high resolution display, with one of the highest contrast ratios that I’ve seen on a tablet. Google could definitely improve greyscale performance a little, and all companies need to start applying the same sort of anti-reflective coatings that Apple applies to their iPads, because the difference in outdoor usability is dramatic when you compare them. The Pixel C’s high reflectivity has been a noticeable obstacle when using it in environments that have overhead lighting, which includes my own home. That kind of little detail is the sort of thing that, when properly recognized and addressed, can really take a product to the next level. As it is, the Pixel C’s display is very good in many respects, but among high end tablets it’s not one I can call the absolute best.